SEOUL • South Korea and the United States have agreed to explore all possible options to rein in North Korean provocation. Here's a look at the main options:

In 1994, the US deployed an aircraft carrier for a potential strike on North Korea's nuclear compound, according to a memoir published in 2000 by former South Korean president Kim Young Sam. The crisis ended after talks between former US president Jimmy Carter and North Korean founder Kim Il Sung.

The costs of a strike would be higher now. North Korea's arsenal has grown, with five nuclear tests since 2006. A surgical attack risks provoking a full-fledged war that could kill millions of people on the peninsula - including in South Korea, a key US ally. Still, the idea of striking North Korea first has gained traction in recent years. 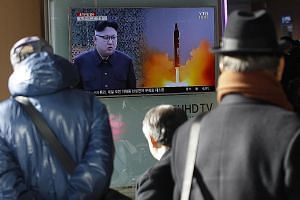 The last six-nation nuclear talks with North Korea - a process that included the US - were held in 2008, and have stalled since.

The current US administration insists that North Korean leader Kim Jong Un agree to denuclearisation as a condition for talks to even be held. But Pyongyang has enshrined its nuclear arms in its Constitution, and Mr Kim has said the programme is not up for negotiation.

South Korean President Park Geun Hye gave the US permission to deploy an anti-missile system known as Terminal High Altitude Area Defence (Thaad) on her country's soil after North Korea conducted its fourth nuclear test in January last year. She was impeached by Parliament in December over an influence-peddling scandal.

Once installed, Thaad would join a network of US missile defence systems across the Pacific that aim to stop North Korean missiles reaching the continental US.

Beijing and Moscow oppose the deployment of Thaad, which they say will alter the region's geopolitical balance. Thaad's powerful radar is capable of penetrating Chinese territory. Media reports have accused China of stepping up economic retaliation against South Korea over Thaad.

The US President may lean more on China, which provides most of North Korea's energy and food, to pressure Pyongyang.

But so far, China's denouncements of North Korea's nuclear programme have had little impact.

Beijing, too, has been angered by Pyongyang's repeated nuclear and missile tests and has signed on to increasingly tough United Nations sanctions.

However, it has said it believes such steps are not the ultimate answer and has called for a return to talks with North Korea.

Some analysts say China fears a collapsed North more than a nuclear-armed North.

A version of this article appeared in the print edition of The Straits Times on February 13, 2017, with the headline 'Ways to deal with a belligerent Pyongyang'. Subscribe
Topics:
More
Whatsapp Linkedin FB Messenger Telegram Reddit WeChat Pinterest Print Purchase Article Copy permalink