HONG KONG • Violence between pro-China demonstrators and those denouncing perceived Chinese meddling in Hong Kong erupted yesterday, with clashes in different areas of the city on a weekend when people traditionally celebrate the Mid-Autumn Festival.

Baton-wielding police officers broke up fights between the two camps at Amoy Plaza, a shopping mall in the Kowloon Bay area, after months of often violent unrest, with several people on both sides visibly bloodied and bruised.

"Hong Kong is China," one woman shouted at passers-by who yelled obscenities in return in an angry pushing and pulling standoff.

The clashes in the Kowloon Bay area spilled out onto the streets, with each confrontation captured by dozens from the media and onlookers on their smartphones. Police detained several people.

But the unrest was minor compared with previous weeks when anti-government protesters attacked the city's legislature and Liaison Office, the symbol of Chinese rule, trashed metro stations and set street fires. Police have responded with tear gas, rubber bullets and water cannon.

Protesters complaining about perceived Chinese interference in the former British colony came out in the hundreds across the territory on Friday, singing and chanting on the Mid-Autumn Festival.

Yesterday, hundreds of anti-government protesters also gathered in the north-western New Territories district of Tin Shui Wai, with a brief standoff with police. 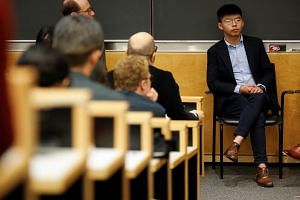 "We need to keep coming out to tell the government to respond to our five demands, otherwise it will think we accept the withdrawal (of an extradition Bill)," said protester Mandy, 26, in Tin Shui Wai, where crowds of protesters, a few waving US flags, shouted "Liberate Hong Kong".

China has accused foreign powers, particularly the US and Britain, of fomenting the unrest.

Other demands of the protesters include the right for Hong Kong people to choose their own leaders.

The spark for the protests was a now-withdrawn extradition Bill, but there are also concerns that Beijing is eroding civil liberties. However, many young protesters are also angry about sky-high living costs and poor job prospects.

In a commentary on social media on Friday, the Chinese Communist Party urged Hong Kongers to "look north" to opportunities in mainland China. "The way out is not in the West," the commentary said.