HONG KONG (CHINA DAILY/ASIA NEWS NETWORK) - A Hong Kong man who was attacked after chastising anti-government protesters in mid-September is out of the hospital now, but he still bears the marks of the beating.

Mr Chow Hiu Tung confronted a group of anti-government protesters, challenged their conduct, and was beaten unconscious for expressing his view.

Mr Chow became an Internet celebrity after a video of the Sept 15 incident went viral. With his eyes still swollen more than a week after the incident, Mr Chow, 49, told reporters he has no regrets about speaking out that day.

Several bruises on his body are stark reminders of the bloody confrontation. He also lost three teeth.

Mr Chow had just left work when he spotted a crowd near the crossroads of busy Gloucester and Marsh roads on Hong Kong Island. It was about 4.50pm. As the crowd came closer, he saw that it was made up of radical protesters waving American and Japanese flags. They were demonstrating against Hong Kong's extradition amendment Bill, which already had been withdrawn.

Infuriated, Mr Chow rebuked the demonstrators and shouted, "Love China! I am Chinese".

Immediately, Mr Chow was surrounded. A video of the incident shows dozens of masked and black-clad protesters attacking and beating him for more than 30 seconds. Some protesters tried to use umbrellas to hide the assault from cameras.

Mr Chow fell unconscious. He bled from his nose and mouth and was taken to a hospital, where his condition initially was listed as critical.

Mr Chow said he felt especially aggrieved by the sight of Japanese flags. He remarked later that people carrying the Japanese flag clearly lack basic knowledge of the humiliating history of the nation as well as Hong Kong itself, at the hands of the Japanese.

"Have they never heard about the nation's humiliation? Do they know Japan once occupied Hong Kong for three years and eight months?"

Mr Aron Kwok, a lawmaker in the city's legislature and a member of the Hong Kong Federation of Trade Unions, said the incident was a wakeup call, sending the alarm that violence by radical protesters has strayed far from the cause of "freedom" and "democracy" which the demonstrators initially claimed to be their purpose.

Mr Chow's experience was not isolated. Late on Saturday night, several attacks by radicals were reported in Yuen Long, New Territories. One video showed a man wearing white, bleeding from a head wound, after being attacked by people wielding batons and umbrellas.

Mr John Tse, chief superintendent of the Hong Kong police public relations branch, said it has become a frequent occurrence for radical protesters to beat up those who have opposite views.

At the daily news conference by police on Monday, Mr Tse urged people to take note of the increasing violence, including widespread vandalism. 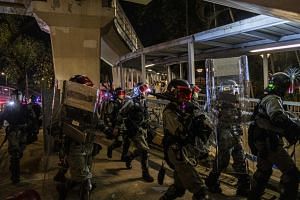 The Wu Kau Tang monument, in Tai Po, New Territories - the only State-level monument to commemorate heroes who died in the battle against the Japanese occupation during World War II－- was vandalised by radical protesters who wrote political slogans on the monument in black paint.

The national flag has also been publicly desecrated in recent demonstrations.

Hong Kong Chief Executive Carrie Lam said on Tuesday that such acts are reckless challenges to the nation's dignity and undermine the implementation of the "one country, two systems" principle in the Hong Kong Special Administrative Region.

The Hong Kong government will pursue those cases in strict adherence to the law, Mrs Lam added.

As for Mr Chow, he said he would do the same again if confronted in a similar situation.

He concedes, however, that after being beaten unconscious, that next time, "I will check whether I am alone or have companions－as these rioters are too violent".