WASHINGTON • China's grip on the global market for rare earth metals has given it the ability to target American weaponry in its trade war with the United States.

Everything from Lockheed Martin's F-35 Joint Strike Fighter to guided missiles and lasers used to determine targets rely on the elements to perform key functions.

China accounts for as much as 95 per cent of global output, and the US relies on the country for 80 per cent of its rare earth requirements.

Rare earths, which despite the name are more widely available than precious metals in the Earth's crust, have been thrust into the spotlight by a series of media reports in China signalling that Beijing is gearing up to use the minerals as a counter in its trade battle with Washington.

"The fact that rare earths are on the menu again means China is using its most powerful political tool in the resources space," said Mr Simon Moores, managing director of Benchmark Mineral Intelligence, an industry researcher. "Rare earths are a niche speciality and critical to the Defence Department."

The US imported US$160 million (S$221 million) worth of rare earth metals and compounds last year, an increase of 17 per cent from the previous year, but down from US$519 million of refined rare earths in 2012, according to the US Geological Survey. 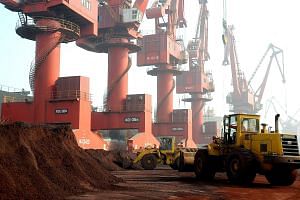 Trade talks: It's up to US now, says China

Each F-35 aircraft - considered one of the world's most sophisticated, manoeuvrable and stealthy fighter jets - requires approximately 417kg of rare earth materials, according to a 2013 report from the US Congressional Research Service. It is the Pentagon's most expensive weapons system and the first fighter designed to serve three branches of the US military.

Rare earths, including yttrium and terbium, are used for laser targeting and weapons in Future Combat Systems vehicles, according to the Congressional Research Service report. Other uses are for Stryker armoured fighting vehicles, Predator drones and Tomahawk cruise missiles.

Meanwhile, the US Defence Department is seeking new federal funds to bolster domestic production of rare earth minerals and reduce dependence on China, the Pentagon said on Wednesday, amid mounting concern in Washington about Beijing's role as a supplier.

The Pentagon's request was outlined in a report that has been sent to the White House and briefed to Congress, said US Air Force Lieutenant-Colonel Mike Andrews, a Pentagon spokesman.

"The department continues to work closely with the President, Congress and US industry to improve US competitiveness in the mineral market," Col Andrews told Reuters. He gave no details, but said the report was tied to a federal programme designed to bolster domestic production capabilities through targeted economic incentives.

The Pentagon has repeatedly flagged its concerns about American reliance on China for rare earth minerals, including in a report last year on vulnerabilities in the US defence industrial base. 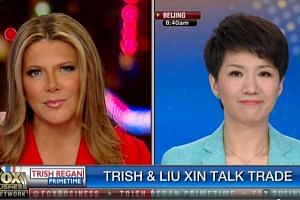 The US Defence Department accounts for about 1 per cent of total US consumption of rare earths, according to a 2016 report from the US Government Accountability Office. Still, "rare earths are essential to the production, sustainment and operation of US military equipment. Reliable access to the necessary material, regardless of the overall level of defence demand, is a bedrock requirement for (the department)", the Government Accountability Office said.

Mr John Neuffer, president of the Semiconductor Industry Association, said the chances of China restricting rare earth exports were growing. "I do expect the other shoe to drop," he told an event hosted by the Washington International Trade Association.

A version of this article appeared in the print edition of The Straits Times on May 31, 2019, with the headline 'US weaponry may be hit if China tightens its grip on rare earths'. Subscribe
Topics:
More
Whatsapp Linkedin FB Messenger Telegram Reddit WeChat Pinterest Print Copy permalink