ATLANTA - A United States government watchdog will on Thursday (Sept 7) raise its concern about the safety and readiness of US ships in the Pacific after a series of four Navy ship collisions in the region this year which resulted in the deaths of 17 US sailors, CNN reported.

The Government Accountability Office (GAO) is expected to warn at a testimony before the US House armed services committee - a copy of which was obtained by CNN - that more than a third of warfare training certifications for the Navy's Japan-based destroyers and cruisers had expired in June.

The GAO's testimony is focused on destroyers and cruisers, the two kinds of ships that were involved in this year's collisions.

The warning by the watchdog would bring up fresh questions on the causes behind the collisions and renew concern about the health of the Navy fleet.

The GAO, along with military leaders and lawmakers, have long highlighted their worries about the Navy's readiness amid an increase in the size of the fleet, even as the number of ships deployed remained the same while the duration of deployments were lengthened.

"The Navy has had to shorten, eliminate, or defer training and maintenance periods to support these high deployment rates," CNN quoted the GAO's John Pendleton, director of defence capabilities and management, as saying in the written testimony. 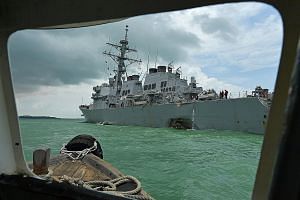 US destroyer collision: Some answers to a mystery at sea 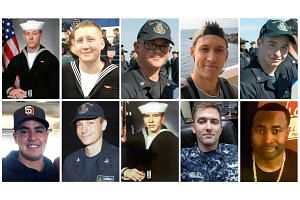 Bodies of all 10 missing sailors found within US warship 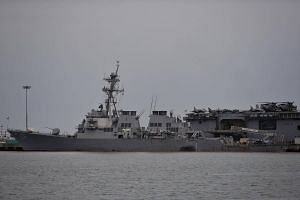 Last month, the Navy's USS John S McCain collided with a Liberian-flagged oil tanker near Singapore, killing 10 sailors. The collision damaged the US warship's left side, near the stern, punching a hole that stretched above and below the waterline.

The cause of the Aug 21 collision, which led to the removal of the Seventh Fleet Commander Vice Admiral Joseph Aucoin, is being investigated.

On June 17, the McCain's sister ship, the USS Fitzgerald, collided with a Philippine container ship, killing seven US sailors. Their bodies were found in a flooded berthing area after the collision.

In May, the Lake Champlain guided-missile cruiser collided with a South Korean fishing vessel, although the crash caused no injuries.

That incident followed another in January when the USS Antietam ran aground in Tokyo Bay, gushing more than 3,785 litres of hydraulic oil near Yokosuka, where the US maintains a large naval base.

The mishaps this year have prompted the Navy to call for a broad investigation into the Seventh Fleet's operations, which have gotten busier amid challenges in the South China Sea and from North Korea.

Headquartered in Japan, the fleet operates as many as 70 ships, including the US Navy's only forward-deployed aircraft carrier, and has around 140 aircraft and 20,000 sailors, Reuters reported last month.

The fleet operates over an area of 124 million square km from bases in Japan, South Korea and Singapore.