WASHINGTON • The US military said one of its warships sailed near the disputed Scarborough Shoal claimed by China in the South China Sea yesterday, angering Beijing at a time of tense ties between the world's two biggest economies.

The busy waterway is one of a growing number of flashpoints in the Sino-US relationship, which include a trade war, US sanctions and Taiwan.

China struck a more aggressive tone in its trade war with the United States last Friday. The tough talk capped a week that saw China unveil new retaliatory tariffs in response to a US decision to raise its levies on US$200 billion (S$275 billion) of Chinese imports to 25 per cent from 10 per cent.

The US destroyer Preble carried out the operation, a US military spokesman told Reuters.

"Preble sailed within 12 nautical miles of Scarborough reef in order to challenge excessive maritime claims and preserve access to the waterways as governed by international law," said Commander Clay Doss, a spokesman for the Seventh Fleet.

Speaking in Beijing, Chinese Foreign Ministry spokesman Lu Kang said the ship had entered waters near the shoal without China's permission, and the Chinese Navy had warned it to leave.

"I must stress once again that the US warship's relevant actions have violated China's sovereignty and undermined the peace, security and good order in the relevant sea areas. China is firmly opposed to this," Mr Lu told a daily news briefing. 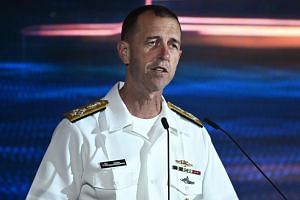 The US was trying to disturb regional peace and stability by using the issue of freedom of navigation and flight, he added.

"We strongly urge the United States to immediately stop such provocative actions so as not to undermine Sino-US relations and regional peace and stability."

It was the second such US military operation in the South China Sea in the last month.