In its editorial, the paper rebukes the United States for not giving the World Trade Organisation its due respect.

BEIJING (CHINA DAILY/ASIA NEWS NETWORK) - The World Trade Organisation's Appellate Body ruled against the United States on Tuesday, in a 2012 case brought by China to challenge US anti-subsidy tariffs on Chinese exports, saying the US did not fully comply with a WTO ruling and could face Chinese sanctions if it does not remove certain tariffs that break WTO rules.

The case, which involved Chinese exports of solar panels, wind towers and steel cylinders worth US$7.3 billion (S$9.92 billion), dates back to the Barack Obama era and has nothing to do with the ongoing Sino-US trade conflict.

But given the rising heat of their current spat, and especially the history of the US proclaiming itself to be a perpetual victim of unfair international trade - a pretext used by the current US administration to slap hefty tariffs on US$250 billion of Chinese goods - the WTO ruling serves as a reminder that he who cries the loudest may not necessarily deserve the most care.

The WTO has more than 160 member economies and given their sometimes conflicting interests, it is normal for them to have trade disputes with one another from time to time.

Thus, an impartial dispute settlement mechanism is vital and indispensable to protect the legitimate interests of the member economies and safeguard the multilateral rules-based trading system.

That's why China has always respected the WTO's dispute settlement procedures, and complied with the world trade body's rulings. It knows well that if each member were to go its own sweet way it would be highly damaging to global trade and growth.

In contrast, the US seems to have the least respect for the WTO and it consistently claims the organisation is biased against it, even though the facts show otherwise.

The White House has said the US may ignore certain rulings by the WTO if they infringe on US sovereignty.

Yet in reality, the US has a similar, if not better, win-loss rate than other countries that have taken complaints to the WTO. 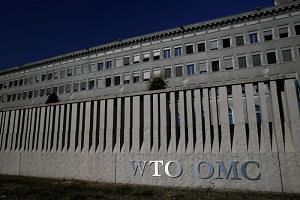 China says US policies are causing existential damage to the WTO

This time the Office of the US Trade Representative again blasted the WTO, saying its decision "undermines WTO rules, making them less effective to counter Chinese subsidies that are harming US workers and businesses." Blah, blah, blah. The usual nonsense the US spouts whenever it hopes to deflect attention from being caught in the act of doing something wrong.

Worse, the US administration has blocked new appointments to the seven-member appellate body, accusing judges of overstepping their mandates and ignoring instructions.

With no sign that the block will be lifted anytime soon, the Geneva-based trade tribunal reportedly could be reduced to only one judge by Dec 11, which means it would not be able to hear new cases.

The US move is tantamount to it holding the WTO to ransom so it can compromise the judicial independence of the WTO Appellate Body and renegotiate its membership of the organisation in a way that would more clearly favour it.

Members must stand together to oppose this and safeguard the independence of the overseer of global trade governance.

China Daily is a member of The Straits Times media partner Asia News Network, an alliance of 24 news media organisations.