AMMAN (REUTERS) - A reduction in US troops taking part in a joint exercise with South Korean forces this year simply reflects a need for fewer personnel and is not because of tensions with North Korea, Defence Secretary James Mattis has said.

About 17,500 US service members are participating in the exercise this month, down from 25,000 last year, according to the Pentagon.

With tensions high on the Korean peninsula, China - Pyongyang's main ally and trading partner - has urged the United States and South Korea to scrap the drills, as has Russia.

Called Ulchi Freedom Guardian, the joint drills will take place from Monday (Aug 21) to Aug 31 and involve computer simulations designed to prepare for the unthinkable: war with nuclear-capable North Korea.

Mattis told reporters while travelling to Jordan that the exercise had been planned months in advance and the focus this year was on integration operations.

"The numbers are, by design, to achieve the exercise objectives and you always pick what you want to emphasise," he said. "Right now, there is a heavy emphasis on command post operations, so the integration of all the different efforts," he said on Sunday. 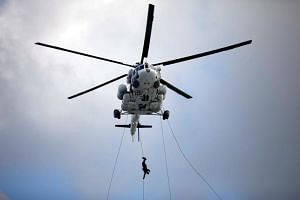 Combative rhetoric between the nations spiked after Pyongyang tested two intercontinental ballistic missiles (ICBM) last month that appeared to bring much of the US within range, sparking an intense warning by US President Donald Trump that Washington could rain "fire and fury" on the North.

The North responded by threatening to fire missiles towards the US Pacific island territory of Guam.

Pyongyang later said it was holding off firing towards Guam while it waited to see what the US would do next.

In a Sunday editorial, North Korea's official Rodong Sinmun newspaper called the exercise "the most explicit expression of hostility against us" and an act of "adding fuel to the fire", reported Yonhap news agency.

It also warned in a separate commentary that the US should "properly face up to the reality".

"The DPRK is the strongest possessor of ICBMs capable of striking the US mainland from anywhere and any time as it pleases," the paper said, according to the North's Korean Central News Agency. "Neither Guam nor Hawaii nor the US mainland can dodge the merciless strike of the Strategic Force of the Korean People's Army."