Pompeo said his latest, fourth trip to Pyongyang was “another step forward” to denuclearisation and he had a “good, productive conversation” with Kim, but more needed to be done.

South Korean President Moon Jae-in held talks with Pompeo in Seoul after the top US diplomat met with Kim for more than three hours during a short trip to Pyongyang that was aimed at breaking a gridlock in their nuclear negotiations.

Pompeo’s trip to Pyongyang happened amid negative signals from North Korea whose actions have fallen short of Washington’s demands for a complete inventory of its nuclear weapons and irreversible steps to give up an arsenal that potentially threatens the United States.

Pompeo said he and Kim discussed denuclearisation steps to be taken by the North and the issue of US government monitoring of those actions, which Washington sees as vital, as well as the measures the United States would conduct in return, Moon’s office said.

In a statement, State Department spokeswoman Heather Nauert said Kim had invited inspectors to visit the Punggye-ri nuclear test site to confirm it has been irreversibly dismantled. The statement did not provide further details.

Pompeo and Kim also agreed to form a working group “at an early date” to discuss the denuclearisation process and the second summit, which Kim proposed to US President Donald Trump in a letter last month, according to Moon’s press secretary Yoon Young-chan. 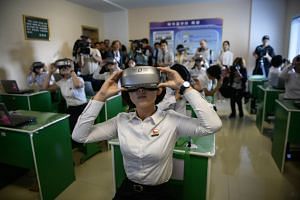 North Korea looks South and beyond 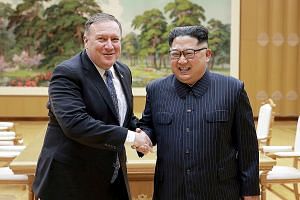 A comfortable reality that is full of contradictions

“Secretary Pompeo said he and Chairman Kim concurred that they will hold the second US-North Korea summit as soon as possible,” Yoon said in a statement.

The two had “refined options” for a location and date of a second summit without offering specifics, the State Department statement said.

“As President Trump said, there are many steps along the way and we took one of them today,” Pompeo told Moon. “It was another step forward. So this is, I think, a good outcome for all of us.”

“@SecPompeo had a good meeting with Chairman Kim today in Pyongyang. Progress made on Singapore Summit Agreements! I look forward to seeing Chairman Kim again, in the near future,” Trump tweeted.

Moon expressed hopes that Pompeo’s trip and the proposed second meeting between Kim and Trump would make “irreversible, decisive progress in terms of denuclearisation as well as the peace process”.

Moon had his own third summit with Kim last month in Pyongyang, which was partly intended to help salvage the stumbling negotiations between Pyongyang and Washington, after Trump called off Pompeo’s planned visit to the North in late August citing lack of progress.

A US official who was part of Pompeo’s delegation said the trip was “better than the last time” but added: “It’s going to be a long haul.”

Kim pledged to work toward denuclearisation during the Singapore summit, but Pyongyang’s actions have since fallen short of US demands for irreversible steps to give up its arsenal.

At his last meeting with Moon, he expressed willingness to allow outside observations of key missile facilities and, for the first time, to “permanently” scrap North Korea’s main nuclear complex in Yongbyon.

But the inter-Korean agreement again failed to stipulate any plans called for by the United States, such as to declare a list of its nuclear weapons, facilities and materials, or a concrete timeline for denuclearisation.

Some experts questioned the significance of opening the Punggye-ri site for inspection.

“Like everything else Kim has done, it is a gesture that mimics disarmament that isn’t actually disarmament,” said Jeffrey Lewis director of the East Asia Nonproliferation Programme at California’s Middlebury Institute of International Studies.

Lewis dismissed the significance of Kim’s offer, saying it is a “nice” gesture but does not represent any progress toward the denuclearisation of North Korea.

While North Korea blew up the entrances of the tunnels in May and removed the diagnostic equipment, the shafts could be reopened or new tunnels could be excavated if Kim decided to restart underground test blasts, he said.

They have not returned to North Korea since they were expelled in 2009.  The IAEA said in August it did not find any indication that North Korea had stopped its nuclear activities, adding to doubts about the country’s willingness to abandon its arsenal.

Kim and Pompeo met for about two hours, and then had lunch together at the Paekhwawon, or 100 Flowers Garden, a prestigious state guesthouse, for another hour and a half, according to a pool report.

“It’s a very nice day that promises a good future for both countries,” Kim said, speaking through an interpreter, as he sat down at the lunch table with Pompeo.

“Thank you for hosting, President Trump sends his regards. And we had a very successful morning, so thank you and I am looking forward to our time here at lunch as well,” Pompeo said.

Pompeo’s last trip did not go well. He left Pyongyang in July hailing progress, only for North Korea to denounce him for making “gangster-like demands.”

Pompeo did not meet Kim on that trip.  Pompeo visited Tokyo on Friday and is also due to travel to Beijing before returning home on Monday.

Pompeo declined to comment when asked if he would agree to North Korean demands for a declaration to end the Korean War or to South Korea’s suggestion that to break the current stalemate, he should avoid pressing again for an inventory of North Korea’s nuclear weapons.

“Trump will likely be tempted to hold such a summit quickly to make history and drive headlines, pointing to another success right before the midterm elections,” said Harry Kazianis, director of defense studies at the Center for the National Interest in Washington.