Growing political restrictions imposed by Beijing on Hong Kong "may be straining the confidence of the international business community", but the territory will continue to get special treatment from the US, a report noted yesterday.

"As a general matter, Hong Kong maintains a sufficient - although diminished - degree of autonomy under the 'one country, two systems' framework to justify continued special treatment by the United States for bilateral agreements and programmes per the Act," said the 2019 Hong Kong Policy Act Report issued by the US.

Under the US-Hong Kong Policy Act, the US treats Hong Kong as a non-sovereign entity distinct from the mainland for matters related to trade, for its domestic law purposes.

Britain handed back Hong Kong to the mainland in 1997, with the city guaranteed a high degree of autonomy and freedoms under the "one country, two systems" principle.

The Act stipulates that Hong Kong, unlike the mainland, is eligible to receive controlled US defence articles sold via direct commercial sale.

Cooperation between the US and Hong Kong remains broad and effective in many areas, including homeland security and the US economy.

But the report warned that the pace at which Beijing intervened in the city's affairs as well as actions by the Hong Kong government consistent with mainland direction have quickened.

The report said apparent inconsistencies in the implementation of the Basic Law have "increased local concerns that mainland central government policy is shifting towards diminished tolerance for human rights and fundamental freedoms in Hong Kong, mirroring the strengthening of authoritarian action inside mainland China in recent years". 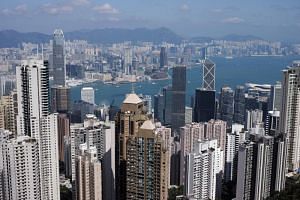 It said there were "particular setbacks" in democratic electoral processes, freedom of expression and freedom of association.

The Hong Kong government barred candidates from local elections based on actual or imputed political views, the report said, citing the example of Ms Lau Siu Lai, who was barred from running in a November 2018 by-election, due to her alleged support for Hong Kong "self-determination".

Other examples of diminished freedoms include the outlawing of the pro-independence Hong Kong National Party (HKNP) in September last year and the authorities' refusal to renew the work visa of Financial Times Asia news editor Victor Mallet after he hosted a talk by HKNP co-founder Andy Chan.

Last November, dissident author Ma Jian was told by Tai Kwun art space administrators that he could not present his work at the venue during the Hong Kong international literary festival. The resulting public outcry forced the organisers to reverse course.

The report follows one last year from the US Congress, which cited similar concerns, while the country's envoy in Hong Kong, Mr Kurt Tong, echoed similar points in a TV interview.

The role that Hong Kong plays in US foreign policy has come under greater scrutiny in recent months, particularly as ties between the US and China fluctuate.