HONG KONG • The United States raised its travel warning for Hong Kong, urging increased caution by visitors to the Chinese territory in the face of what it described as civil unrest after months of sometimes violent street protests.

The protests began with opposition to a now-suspended extradition Bill and have evolved into a direct challenge to the city's government and calls for full democracy.

"These demonstrations, which can take place with little or no notice, are likely to continue," said the advisory, posted on the website of the US State Department.

The advisory was raised to level two on a four-point scale. Australia also warned its travellers in an updated advisory.

A Hong Kong government spokesman said while recent incidents might have caused inconvenience, they are confined to a limited area and "not widespread".

The protests pose a challenge to Chinese President Xi Jinping, who is dealing with a bruising trade war with the US.

China's Foreign Ministry lodged stern representations with the US, urging its officials to stop sending wrong signals to the "violent separatists" in Hong Kong. Citing media reports, it said in a statement that US diplomatic officers had met "major Hong Kong independence" activists.

The protests have left Hong Kong facing its worst crisis since it returned to China from British rule in 1997, said Mr Zhang Xiaoming, head of China's Hong Kong and Macau Affairs Office (HKMAO).

More protests are planned in several districts across the city this weekend, starting today, with demonstrators also planning a three-day rally at the city's international airport. 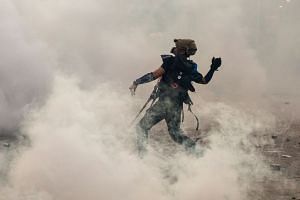 Police warned activists to protest peacefully and said they had detained three more, raising the number arrested to nearly 600 - with the youngest aged 13 - since the mass protests began in June.

Dear travellers, please forgive us for the 'unexpected Hong Kong'. You've arrived in a broken, torn-apart city, not the one you have once pictured. Yet the city you imagined is exactly what we are fighting for.

THE MESSAGE ON PAMPHLETS CIRCULATED BY AIRPORT PROTESTERS, who distributed them in an attempt to help tourists understand the demonstrations.

Protesters want the city's embattled Chief Executive Carrie Lam to categorically withdraw the extradition Bill, and an independent inquiry into the government and the police handling of the controversy.

But Chinese officials have rejected calls for an independent inquiry - a demand that has widespread support - according to lawmaker Michael Tien, who was at a HKMAO meeting with city representatives.

Young people are at the forefront of the protests, as they worry about China encroaching on Hong Kong's freedoms. The normally efficient and orderly city has seen its transport network besieged by demonstrators, while protests have shut stores and shopping malls.

Three masked activists, who did not give their names, held a news conference yesterday, their second this week, to criticise what they called arbitrary arrests and the use of tear gas by the police.

"The continuation of such attempts at spreading fear and suppressing the freedom of press will eventually backfire on the government itself," said one of the activists.

On Wednesday night, hundreds of protesters held a rally and shone lasers on the dome of the city's Space Museum in Tsim Sha Tsui, mocking the police's description of the pointers as "laser guns".

Several thousand Hong Kong lawyers, dressed in black, marched in silence on Wednesday to call on the government to safeguard the independence of the city's Department of Justice.

They fear the Justice Department's prosecutions of arrested protesters are taking on an increasingly political slant, with many of those arrested charged with rioting, which carries a 10-year jail term.

Protesters have started to use increasingly diverse tactics to evade capture, shifting quickly from place to place and using online platforms such as Telegram to direct thousands of people.

"Dear travellers, please forgive us for the 'unexpected Hong Kong'. You've arrived in a broken, torn-apart city, not the one you have once pictured. Yet the city you imagined is exactly what we are fighting for," the pamphlets said.