China reacted strongly to US Defence Secretary Ashton Carter's remarks on building a "principled" security network, accusing the United States of not observing the very principles and norms it champions.

"We believe that for the international community to develop together, indeed we need to abide by the universally recognised principles and norms," said Rear-Admiral Guan Youfei from China's Ministry of National Defence, hours after Dr Carter's remarks yesterday.

"But these principles and norms should be, as I said, firstly recognised," added the director of the ministry's Office for International Military Cooperation. 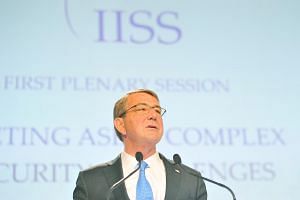 US warns China against 'Great Wall of self-isolation'

He then went on to remark that while China strictly complies with the universally recognised principles and international laws, the US "sometimes does not do well in this regard". 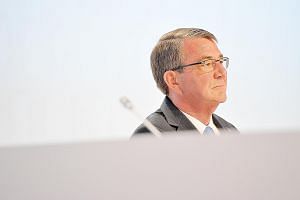 Dr Carter, in his morning address at a plenary session of the IISS Shangri-La Dialogue security forum, had spoken about building a principled security network in which a state was "free to make its own political, economic and military choices, free from coercion and intimidation".

Asean should get its house in order first, says Hishammuddin

He made clear that this network, based on international norms, excluded no one and was not aimed at any country, remarks seen by observers as conciliatory and non-confrontational.

FPDA 'now more vital than ever'

Still, it nettled the Chinese sufficiently to hold a press conference to rebut Dr Carter.

"Very often, we can see the US putting its own principles above international principles and on some occasions, hegemony outraces sovereignty," said Rear-Adm Guan.

He gave the example of US' sale of arms to Taiwan - which China regards as a breakaway province to be unified with the mainland someday - as going against international norms and principles.

As for the US' freedom of navigation operations close to Chinese- claimed islands in the disputed South China Sea, he said: "The US is actually pursuing the freedom of doing whatever it wants."

Citing the fact that the US has not acceded to the United Nations Convention on the Law of the Sea, he said: "With such a big principle, the US still neglects. We cannot help wondering what kind of principle the US adheres to."

Still, he also conceded that the military relationship between the two major powers was a maturing one, citing progress made in the management of differences between the two sides, including joint exercises in each other's territory and confidence-building measures.

For military cooperation to advance further, however, the US would have to stop its arms sales to Taiwan and its reconnaissance activity against China, and remove certain discriminatory laws against China, he added.

A version of this article appeared in the print edition of The Sunday Times on June 05, 2016, with the headline 'US 'neglects international norms that it champions''. Subscribe
Topics:
More
Whatsapp Linkedin FB Messenger Telegram Reddit WeChat Pinterest Print Purchase Article Copy permalink