United States President Donald Trump has referred to his Chinese counterpart Xi Jinping as the "king" of China. So, it was fitting that the first stop on his first state visit to Beijing was the sprawling imperial palace of the Ming and Qing emperors, the Forbidden City.

Mr Trump and his wife Melania, together with Mr Xi and his wife Peng Liyuan, drank tea at Bao-yunlou, or the Hall of Embodied Treasures. The US leader also showed Mr Xi a video of his granddaughter Arabella Kushner, six, reciting Chinese poems.

Under a blue sky in Beijing, the US first couple, accompanied by their Chinese hosts, also toured the imposing three main halls of the imperial complex: the Hall of Supreme Harmony, Hall of Central Harmony and Hall of Preserving Harmony.

They also watched craftsmen repair relics. When he entered the first artefacts room, Mr Trump came upon a "musical clock with country scene", a "gourd-shaped clock with rotating flowers" and a "clock with lifting tower", the White House said.

"Unbelievable," Mr Trump said of the tower, according to the release.

The US President and his wife were also treated to a Beijing opera performance on a stage that had not been used for 100 years, according to a CCTV news report, before having dinner in the palace grounds. 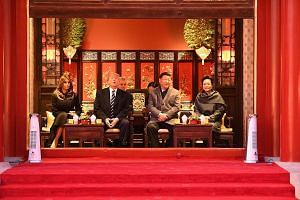 Mr Trump is the first state guest of Mr Xi after the Chinese Communist Party's 19th national congress last month, at which the Chinese leader consolidated his power.

Mr Trump, who had visited the US' strategic allies Japan and South Korea before coming to Beijing, had congratulated Mr Xi on his re-election as party chief before flying out of South Korea. He had tweeted: "I very much look forward to meeting with President Xi, who is just off his great political victory."

This invited criticism, including from Mr Ely Ratner, an ex-adviser to former vice-president Joe Biden. Mr Ratner tweeted that it was a "straight-up repudiation of American values and interests".

Mr Trump's sumptuous first day at the Forbidden City was part of what the Chinese have promised will be a "state visit-plus", pulling out all the stops to fete the US leader.

Also yesterday afternoon, China and the US signed business deals worth about US$9 billion (S$12.3 billion), said US Commerce Secretary Wilbur Ross, adding that more agreements will be signed today.

The hard work of Mr Trump's three-day visit starts today, when the two sides try to iron out huge differences over the North Korea nuclear crisis and the enormous trade deficit the US has with China.

Mr Trump wants China to do more to rein in North Korea's nuclear and missile programmes, which not only threaten the security of North-east Asia, but are also beginning to possibly threaten the US West Coast.

On trade, the US and China will sign deals worth billions of dollars, but these are unlikely to make a big dent on the huge trade deficit that hit US$347 billion last year.

China is likely to make bigger concessions on trade than on North Korea, but only concessions that will not affect the Chinese economy too adversely, said Chinese expert on China-US relations Shi Yinhong of Renmin University.

The Chinese are hoping, however, that the visit will be a success.

"If China and the US have good relations, then many global issues can be resolved easily," said Professor Jia Qingguo of Peking University.

A version of this article appeared in the print edition of The Straits Times on November 09, 2017, with the headline 'US leader gets palatial treat at start of China visit'. Subscribe
Topics:
More
Whatsapp Linkedin FB Messenger Telegram Reddit WeChat Pinterest Print Purchase Article Copy permalink