China, the Korean Peninsula and Japan are closely watching how the US midterm election results will affect the Trump administration's policies with regard to issues such as trade, security and engagement with North Korea. The Straits Times' correspondents in Beijing, Hong Kong, Seoul and Tokyo report.

Japan is bracing itself for an even harsher line on trade from its security ally after US President Donald Trump's Republicans lost control of the House of Representatives to the Democrats on Tuesday.

Mr Trump has a track record of pillorying countries over purportedly "unfair" trade, and Japanese officials are fretting that he will use this to galvanise his support base as he gears up for re-election in 2020.

So not unexpectedly, Mr Trump took aim at Japan again on Wednesday, saying: "We have close to a US$100 billion (S$138 billion) trade deficit with Japan. And Japan has treated us very unfairly. They send in millions of cars at a very low tax. They don't take our cars, and if they do they have a massive tax."

Both countries are set to begin talks on a Trade Agreement on Goods in January, with the US likely to push for more access in agriculture and cars. But Japan maintains that it will not make any concessions beyond what had already been agreed in the Trans-Pacific Partnership (TPP) deal that Mr Trump pulled the US out of.

Mr Trump's comments drew an immediate pushback from Japan's Chief Cabinet Secretary Yoshihide Suga, who said the country will never enter into any deal detrimental to its national interests. "There is common understanding that the US-Japan security alliance is unshakeable and goes beyond political partisanship," he said.

US Vice-President Mike Pence will be in Tokyo for a two-day visit starting on Monday to meet Japanese Prime Minister Shinzo Abe on issues such as North Korea, before both leaders make their way to Singapore and Papua New Guinea to attend multilateral summits.

Certainly Abe is close to Trump but I'm not sure how much trust we can put on this personal bond, and there is some apprehension that Trump may tie up trade and security issues.

Japanese media reports, however, said there are no plans for him to meet Finance Minister Taro Aso for what would be their third Japan-US Economic Dialogue meeting, and the first since October last year.

Experts believe US-Japan trade will continue to prove prickly, given that the Democrats have traditionally been more cautious on trade than the Republicans.

Keio University's Dr Yasushi Watanabe, noting that former US president Barack Obama had faced resistance in his push for the TPP, said trade might be an issue both Republicans and Democrats could come to see eye to eye on.

"With the Congress divided, Trump will find it hard to pursue his own domestic agenda and so, to score points and please his core constituencies, he will continue his so-called America First protectionist approach on trade," he said. 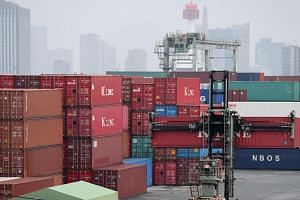 What's next after US midterm polls

"Certainly Abe is close to Trump but I'm not sure how much trust we can put on this personal bond, and there is some apprehension that Trump may tie up trade and security issues."

An editorial in the Yomiuri Shimbun on Thursday said Japan should "assume further turmoil will unfold in the US political landscape and deal with this strategically".