In its editorial, the paper says China can strike back with trade volume between the two countries exceeding US$580 billion.

BEIJING (CHINA DAILY/ASIA NEWS NETWORK) - It has been said that all the vices offer at least some kind of pleasure, except for one, and Washington seems intent on proving that the only exception is envy, which causes nothing but irritation, bitterness and rage.

Although the US says it is not willfulness but necessity that is compelling its actions targeting Chinese imports, it seems to be Washington's fixation on the trade deficit between the two countries, as a barometer of their economic competition, that has prompted such emotions.

Having already announced steep tariffs on steel and aluminum imports, which, given the exemptions, will likely fall heavily on those from China, US President Donald Trump is now reportedly planning to impose tariffs targeting imports of Chinese information technology, telecommunication and consumer products.

Despite all the warnings that its tariffs will prompt retaliatory actions from China and likely spark a damaging trade war, it seems the Trump administration cannot resist the temptation of trade protectionism in pursuit of US primacy, which it believes is being challenged by the economic competition playing out in a broader strategic context.

The outspoken TV personality Larry Kudlow, who the White House confirmed has replaced Gary Cohn as Trump's economic advisor, said on Wednesday that China has "earned a tough response" from the United States on trade, because it doesn't play by the rules.

But such a claim, whose proof is merely the words of the accuser, has become something of a catchall for the Trump administration's grievances. And it is a charge that can more justifiably be made against the US itself, since it is stepping away from the principles of reciprocity, free markets and free trade that are at the heart of the global economy.

Although it repeatedly espouses these doctrines, it is exploiting their benefits by only adhering selectively to the rules and agreements. 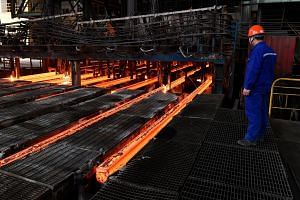 China calls for US to withdraw trade tariffs on steel, aluminium

China has sought to remedy the US' preoccupation with the trade gap and resolve their differences through negotiations aimed at agreeing on reciprocal actions to achieve mutual benefits, and that still remains the case.

However, that does not mean that it will allow itself to be the target for the arrows of adversity with which the US wants to put it at a disadvantage.

Now the trade volume between the world's top two economic powerhouses has exceeded US$580 billion (S$762 billion), China has ample arrows of its own with which to fight back.

It should be borne in mind that even the most playful cat will scratch if you provoke it beyond a certain point.

China Daily is a member of The Straits Times media partner Asia News Network, an alliance of 23 news media.