BEIJING • The United States welcomed efforts by China to promote infrastructure connectivity as part of its Belt and Road initiative and US companies can offer top-value services, White House adviser Matt Pottinger has said.

Major Western states have resisted Chinese overtures to sign up formally to the initiative, although some like Britain have embraced it.

"The United States recognises the importance of improving economic connectivity through high-quality infrastructure development and, hence, welcomes efforts from all countries, including China, in achieving this," Mr Pottinger said, according to a statement from the US Embassy in Beijing.

Representatives of numerous countries are attending the Belt and Road Forum, including North Korea, which the US has objected to. Sources said the US sent a diplomatic note to China last Friday warning that North Korea's attendance sent the wrong message at a time when the world was trying to pressure the country over its repeated missile and nuclear tests. 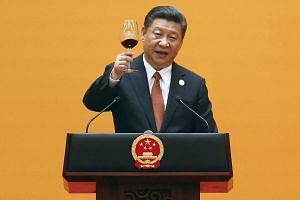 The US Embassy cited Mr Pottinger as saying that American firms were ready to take part in Belt and Road projects.

"US firms can offer the best-value goods and services required over the life of a project," he said, adding that the embassy and US companies will set up an American Belt and Road working group to participate in the initiative.

British finance minister Philip Hammond, who is attending the forum, said yesterday that Britain is a natural partner for the initiative.

He added that as Britain leaves the European Union, it wants more trade with the world, not less.

"As China drives forward the Belt and Road initiative from the East, we in Britain are a natural partner in the West, standing ready to work with all Belt and Road partner countries to make a success of this initiative," said Mr Hammond.

China is one of the countries Britain hopes to sign a free trade deal with once it leaves the EU.

Australian Trade Minister Steven Ciobo, however, said that while his country is receptive to exploring commercial opportunities in the initiative, any decision would be incumbent on national interest.

Echoing concerns of some countries, he said infrastructure investment across the region required "a level playing field based on market principles and adherence to international best practice in financing".

India, China's neighbour, did not send an official delegation to the forum and instead criticised the initiative, warning of an "unsustainable debt burden" for nations involved.

India is incensed that one of the key projects passes through Kashmir and Pakistan. The rivals have fought two of their three wars over the disputed Kashmir region.

"No country can accept a project that ignores its core concerns on sovereignty and territorial integrity," said Indian Foreign Ministry spokesman Gopal Baglay.

India is also worried about China's economic and diplomatic expansion through Asia, particularly in the region it considers to be its sphere of influence.

A version of this article appeared in the print edition of The Straits Times on May 15, 2017, with the headline 'US can offer China 'best-value services''. Subscribe
Topics:
More
Whatsapp Linkedin FB Messenger Telegram Reddit WeChat Pinterest Print Purchase Article Copy permalink