TOKYO • Japanese Prime Minister Shinzo Abe said yesterday he wants to build a relationship of trust when he meets US President-elect Donald Trump, stressing that the two-way alliance is the core of Tokyo's diplomacy and security.

Mr Abe will be the first foreign leader to meet Mr Trump since the latter's election on Nov 8. They were due to meet late yesterday (early today, Singapore time) at Trump Tower in New York.

Before leaving Tokyo, Mr Abe told reporters that the United States-Japan alliance "is the cornerstone of Japan's diplomacy and security".

"Only when there is trust does an alliance come alive," he said.

Mr Trump's aide, Ms Kellyanne Conway, said the meeting would likely be "much more informal", given that Mr Trump does not take over the White House from President Barack Obama until Jan 20. 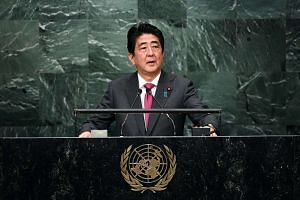 "Any deeper conversations about policy and the relationship between Japan and the United States will have to wait until after the inauguration," she said, speaking on CBS television.

Another Trump aide said the meeting "shows Mr Trump's commitment to the relationship" with Japan.

Republican Devin Nunes, a member of the presidential transition team, described Japan as "one of our most important, longest allies" after talks with an Abe aide in Washington to prepare for the meeting, Kyodo News reported.

Mr Trump, a Republican, had fanned worries in Tokyo and beyond with his comments during the election campaign.

Mr Abe's adviser, Mr Katsuyuki Kawai, said he had spoken to several Trump advisers and lawmakers since arriving in Washington on Monday, and had been told "we don't have to take each word that Mr Trump said publicly literally".

China will also be keeping a close eye on the meeting for clues on how the President-elect, who has never held public office, is likely to conduct foreign policy, sources with ties to the leadership in Beijing said.

They also said Beijing is observing whether Mr Trump would go through with a deployment of a US anti-missile system in South Korea.

"Whether deployment of the Terminal High Altitude Area Defence is delayed is a political weather vane," one source said.

A version of this article appeared in the print edition of The Straits Times on November 18, 2016, with the headline 'US alliance the core of Japan's diplomacy and security: Abe'. Subscribe
Topics:
More
Whatsapp Linkedin FB Messenger Telegram Reddit WeChat Pinterest Print Copy permalink