HONG KONG - A professor at the University of Hong Kong, who was charged with murder after the body of his wife was found inside a suitcase at his office, will be put on suicide watch in jail, a court heard on Thursday (Aug 30).

Associate professor Cheung Kie Chung, 53, made his first appearance in the dock on Thursday to face the murder charge, the South China Morning Post reported.

Cheung, who is from the Department of Mechanical Engineering, did not enter a plea or apply for bail, according to the Post.

He is remanded in custody until the next hearing on Nov 22.

Magistrate Li Chi Ho granted an application by the prosecutor for a "special watch by the Correctional Services Department, as the defendant claimed to feel suicidal", the Post reported.

Cheung was charged with murdering Ms Chan Wai Man on Aug 17 at his home in Wei Lun Hall. He is the warden of the dormitory where he lives with his wife, their daughter and son.

He reported his wife missing on Aug 20, saying she had not returned home after an argument over family toilet hygiene three days earlier. 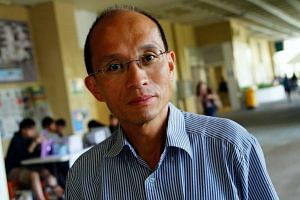 Police said they became suspicious of Cheung after CCTV footage failed to show his wife leaving their home, but Cheung was seen moving a large wooden box out of the premises.

Police searched Cheung's office on the afternoon of Aug 28, after days of investigation. When they opened the wooden box, they found the suitcase that contained what they believed was his wife's body. Cheung was arrested.

Superintendent Law Kwok Hoi told reporters on Tuesday night: "There was blood seeping out from the suitcase and it stank."

He said the victim might have been strangled as an electrical wire was tied around her neck, but the cause of death still needed to be confirmed by a post-mortem.

In court on Thursday, Cheung looked calm, the Post reported.

Dr William Cheung, chairman of the HKU Academic Staff Association - of which Cheung Kie Chung is a vice-chairman - was at the hearing to support the latter, along with other committee members of the association.

Cheung Ki Chung had served multiple terms as a member of HKU's governing council. The university regularly ranks among the top 10 in Asia.

Dr William Cheung, who expressed worry about his long-time colleague, said that he had never heard of Cheung Kie Chung being suicidal, the Post reported.

"He's always been so helpful to colleagues, many colleague just cannot believe what has happened," said Dr William Cheung.

"From what I saw in court today, he just looked straight into the judge when hearing the charge, without even looking at members of audience," he noted.

The arrest of the professor comes a week after the start of the murder trial of Malaysian professor Khaw Kim Sun, who was accused of killing his wife and daughter in 2015 with a yoga ball filled with carbon monoxide.

The 53-year-old associate professor at Chinese University has denied two counts of murder, and urged police not to get his lover involved in their investigation.