China said yesterday that more than 30 other countries might find themselves unwittingly embroiled in legal battles similar to the case brought by Manila against Beijing over disputed claims to the South China Sea.

The comments by senior Chinese diplomat Ouyang Yujing takes Beijing's argument that the UN tribunal hearing the case has no jurisdiction a step further and is China's latest attempt to rally international support ahead of the tribunal's ruling on its territorial claims. Mr Ouyang said the Philippines' move serves as a "reality check" to these countries, which include France and Russia.

Like China, these 30-plus signatories of the United Nations Convention on the Law of the Sea (Unclos) had declared they do not accept compulsory arbitration under Unclos on matters concerning maritime boundaries delimitation. 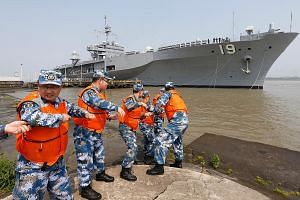 "These countries can become embroiled in a case that they are completely unaware of," said Mr Ouyang, who heads Chinese Foreign Ministry's Boundary and Ocean Affairs department. "This causes grave harm to the international rule of law."

China declared it would opt out of Unclos' compulsory settlement mechanism in 2006 and has argued that this makes the current case by the Philippines void.

Analysts say these remarks are part of China's recent diplomatic campaign aimed at refuting the UN tribunal's jurisdiction to examine the case - brought by Manila to the Hague in 2013 - ahead of the court's ruling, which is expected within weeks.

China has always maintained that it would neither participate in the arbitration nor accept its results. It has argued that the essence of Manila's case is sovereignty, which Unclos cannot rule on, and has hit out at the Philippines for "abusing" the legal process.

China's argument, however, was rejected last October by the UN tribunal, which said it had the right to hear the case.

National University of Singapore ocean law expert Robert Beckman feels that the other countries that have made exclusion declarations similar to China's would understand that disputes between countries over whether these declarations apply will be decided by the tribunal or court.

China's diplomatic efforts are an attempt to form an "international front" before the ruling, as well as to ensure Asean as a group does not endorse the tribunal's ruling, said South China Sea expert Ian Storey from the Iseas Yusof Ishak Institute. "But the real question is how many of these 30 countries would agree with China's position? Not many, I suspect," he told The Straits Times.

Mr Ouyang yesterday sidestepped a question on whether China might resort to force in the event of an unfavourable ruling, saying that China will "firmly uphold its sovereignty" and continue to seek resolutions through direct negotiation.

A version of this article appeared in the print edition of The Straits Times on May 07, 2016, with the headline 'UN ruling on S. China Sea dispute 'may impact other countries''. Subscribe
Topics:
More
Whatsapp Linkedin FB Messenger Telegram Reddit WeChat Pinterest Print Purchase Article Copy permalink