BEIJING • Typhoon Megi smashed into the Chinese mainland yesterday, killing one person, after leaving a trail of destruction and four people dead in Taiwan.

More than 500 people were hurt when the storm raked across the island, including eight Japanese tourists whose bus was toppled by the strong winds. One remains in critical condition.

Megi hit China with winds of around 120kmh, dumping heavy rain and dropping more than 300mm of precipitation in several areas, according to the official Xinhua news agency.

Local media reports from the coastal province of Fujian said one man died in his home during a flash flood.

Images on the state broadcaster CCTV showed parked cars in the coastal city of Xiamen submerged up to their windshields in floodwaters. Schools were shuttered across the province and train services cancelled, Xinhua reported.

The main damage from the storm was in Taiwan, where schools and offices were shut for a second day after Megi left roads blocked by landslides and homes flooded. 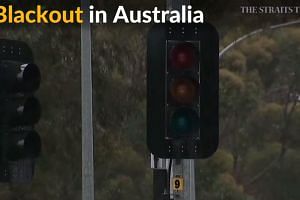 Storms knock out power to whole of South Australia

The four deaths on the island included a man who was killed by a falling scaffolding and a 17-year-old boy who drowned when his boat overturned.

Around 4,300 people remained in temporary shelters after more than 14,800 were evacuated from their homes, according to Taiwan's Central Emergency Operation Centre.

At its peak, Megi knocked out power for close to 3.8 million households, the second worst on record after the outage caused by Typhoon Soudelor in August last year.

A million households were still without power yesterday. "Fallen trees and signboards brought down many power lines and electrical poles, leading to severe power outages across the island," Taiwan Power Company said.

The authorities were rushing to clear blocked roads yesterday, including those leading to mountainous villages in the popular hot springs town of Wulai.

Wulai, one of the areas worst hit by Typhoon Soudelor, had evacuated 200 residents ahead of the storm. "The river swelled and flooded the old street, damaging the basements of some homes," said Mr Shen Hui-kang, a spokesman at Wulai's district office.

Mountainous areas across Taiwan have been lashed by torrential rains, with some parts of north-east Yilan county getting 1.3m of rain since Monday. Nearly 300 flights were either cancelled or delayed yesterday and trains were halted. Services resumed later in the day.

Megi struck as parts of the island were still recovering from Typhoon Meranti earlier this month. That was the strongest storm on the island in 21 years.

Meranti, which left one dead in Taiwan before killing another 28 as it moved to eastern China, was followed closely by the smaller Typhoon Malakas.

A version of this article appeared in the print edition of The Straits Times on September 29, 2016, with the headline 'Typhoon leaves 5 dead in China and Taiwan'. Subscribe
Topics:
More
Whatsapp Linkedin FB Messenger Telegram Reddit WeChat Pinterest Print Copy permalink