Some 22,000 ducks were killed in Muan and 8,500 in Cheongju to prevent the possible spread of the disease, according to veterinary authorities.

The latest outbreaks come four days after the H5N6 avian influenza virus was detected at a chicken farm in Haenam, South Jeolla Province, and a duck farm in Eumseong, in North Chungcheong Province. Those cases resulted in about 40,000 chickens and 22,000 ducks being culled. 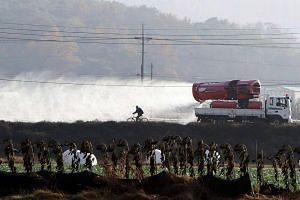 The ministry has dispatched a quarantine team to the sites and begun to restrict the movement of animals, people and vehicles at the farms.

Separately, the authorities are trying to determine whether avian influenza detected at farms in Yangju and Gimje was the H5N6 strain, with the results expected on Wednesday (Nov 23), reported Yonhap.