HONG KONG (AFP) - Two technicians charged with rigging tests on concrete used to build a multi-billion-dollar bridge connecting Hong Kong with China and Macau have been jailed for 22 and 32 months respectively, reports said on Thursday (July 26).

Billed as the world's longest sea bridge, the project has been touted as an engineering wonder by its supporters but slammed as a "white elephant" by its critics.

Officials say it will boost business and cut travel time, but opponents in Hong Kong see it as another attempt by Beijing to tighten its grip on the semi-autonomous city.

There have also been safety concerns - multiple workers have been killed in construction-related accidents and 19 lab workers were charged last year over faking concrete test reports, with one man jailed for eight months last December.

The court was told earlier that Kwong's attempts at rigging the tests included substituting the brick with a metal cylinder to meet strength requirements, the South China Morning Post reported.

The construction of the bridge has been dogged by delays, budget overruns, accusations of corruption and the deaths of construction workers. 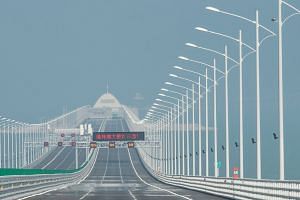 Since 2011, at least 369 industrial accidents and nine deaths have been recorded, according to the labour department.

Building started in 2009 on the 55km crossing, which includes a snaking road bridge and underwater tunnel, linking Hong Kong's Lantau Island to the southern mainland Chinese city of Zhuhai and the gambling enclave of Macau, across the waters of the Pearl River Estuary.

Officials put the current cost overrun of the main bridge section at 10 billion yuan (S$2 billion), partly driven by engineering challenges, which have included problems with the drifting of reclaimed land.

The original cost of that section, including bank loans, was 37.7 billion yuan.