HONG KONG - Two Hong Kong pro-democracy lawmakers who were disqualified over their improper oath taking at the city's legislature applied for an appeal against the court ruling on Thursday (Nov 17).

Mr Sixtus Leung Chung Hang and Ms Yau Wai Ching filed their appeal on Thursday morning, two days after Hong Kong’s High Court ruled that the pair should be disqualified from the legislature for failing to take their oaths “faithfully and truthfully” last month.

The pair from the Youngspiration party also applied on Thursday for a court order to stop the government from declaring their seats vacant and a hearing was also held to hear their application for a stay of execution.

That hearing, however, ended after only 10 minutes, with the judges saying there was no need for the stay of execution, after the Legislative Council (Legco) president's lawyer told the court that the president will not gazette the vacancies before the court's hearing next Thursday (Nov 24). 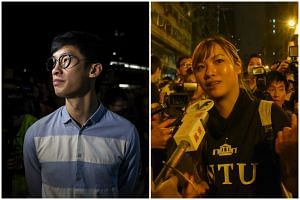 The court battle over the oath-taking row came after Justice Thomas Au Hing Cheung on Tuesday ruled that the pair had declined to take their Legco swearing-in oaths and should thus be disqualified from the legislature.

The judgment, which is in line with a controversial Beijing ruling last week stating that “those who declare Hong Kong independence” have no right to run for the legislature, also bars the two from re-taking their oaths.

At a swearing-in ceremony on Oct 12, the two barred lawmakers had used words insulting China and displayed a banner that read “Hong Kong is not China”.

The court ruling is in line with a controversial Beijing ruling last week stating that “those who declare Hong Kong independence” have no right to run for the legislature.

Beijing’s interpretation of the city’s Basic Law, or mini-Constitution, has been seen by many Hong Kongers as undermining the city’s judicial system and eroding its autonomy, leading to large street protests in the city last week.