TOKYO - The Tokyo metropolitan government will relocate the operations of the famous Tsukiji fish market to nearby Toyosu waterfront area between September and October 2018.

A specific date will be discussed with industry groups, Kyodo News quoted the local government as saying on Monday (Oct 16).

The Tokyo government wants to reach an agreement on the date this month at a council consisting of officials from the municipality and businesses, said the report.

The ageing fish market, which is also the world's busiest, was supposed to be relocated to the waterfront site at Toyosu in November last year, but the move was thwarted over pollution concerns.

At one point, toxins such as benzene were routinely detected to be at least 100 times the approved limit at Toyosu, a former gas production plant.

The local government expects that additional safety measures to address soil contamination at the new site will be completed no later than next July, Kyodo reported. 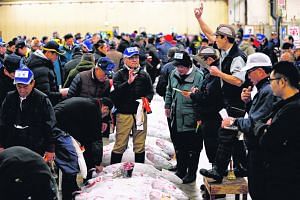 The announcement on Monday came after Tokyo Governor Yuriko Koike said in late August that the market, where daily fish auctions attract many tourists, will be moved no earlier than next June.

After the relocation, the local government plans to start demolishing the renowned market from October 2018 and utilise the vacant site mainly as a logistics base for the 2020 Tokyo Olympics and Paralympics, Kyodo said.