The discovery of chemical contamination has halted the famed fish market's planned move to a new location. Walter Sim meets stallholders, who are in a bind as the controversy drags on.

Tucked away in one corner of Tsukiji Market is a non-profit library with a treasure trove of reference materials that bear testimony to the celebrated site, which turns 82 this year amid a sea of confusion.

Tsukiji's own fortunes have been synonymous with changing times in Japan. The revered site - famous for its early morning fish auctions - had been due to shut on Nov 7 last year for a major highway to be built in time for the 2020 Tokyo Olympic Games.

But Tsukiji's move has been indefinitely delayed over pollution concerns at the new Toyosu site, a former gas plant, raising a stink among merchants and stakeholders uncertain about their future.

Chief librarian Kimiko Fukuchi, who is in her 60s, has emerged as one of the strongest proponents for the move - barring any safety or hygiene issues.

Speaking in her library in a second-floor shophouse in the inner market, she tells The Straits Times in a recent interview: "The current Tsukiji site has, quite simply, outgrown its capacity."

The first seven groundwater tests commissioned by the Tokyo government had not shown problematic results - but the eighth test last September showed carcinogenic benzene at 1.7 times and arsenic at 1.9 times the limits.

She cites issues like near misses between the buggies speeding by and market visitors that have been exacerbated by the sheer number of tourists, as well as how the market is inadequately equipped with cooling systems to alleviate Tokyo's brutal summers.

The move to Toyosu involving the Tsukiji inner market, or jonai, has been put on ice indefinitely after a series of alarming developments - not least, groundwater test results last month showing carcinogenic benzene levels at 79 times the allowed limit at the new site.

Now, questions prevail over whether Tokyo Governor Yuriko Koike will eventually pull the plug on the relocation. She has said the earliest a move could take place is at the end of this year.

One of those hoping for a speedy resolution is Mr Yutaka Kadono, 80, who has been working at the well-loved market for 62 years.

He said he had wanted to retire at the end of October, after glaucoma in his left eye started to affect his eyesight, but has decided to postpone retirement until, at least, a resolution of the relocation issue.

Meanwhile, the newer outer market, or jogai, will be staying put.

The Tokyo metropolitan government (TMG) last November opened a three-storey building in the outer market, housing jonai merchants who want to retain a presence at Tsukiji even after Toyosu opens - or who simply do not want to move.

Seafood merchant Nisshin, established in 1996, belongs to the latter category. Its manager, Mr Makoto Hoshiba, 60, told The Straits Times that he will miss the "wet market atmosphere" evidently absent in the sterile, sparkling clean environment of the new building.

The first seven groundwater tests commissioned by the TMG had not shown problematic results - but the eighth test last September showed benzene levels at 1.7 times and arsenic at 1.9 times the limits. Then came the alarming results last month.

And to make matters worse, it was found last September that Toyosu was missing a 4.5m-deep layer of fresh soil that experts say is a must to protect the site from toxins.

Local media reports last month said the TMG is arranging to spend an extra nine billion yen to compensate businesses for losses due to the postponed move to Toyosu.

Businesses are bleeding millions for each day the Toyosu site stands idle, stakeholders have said.

"We can't make any plans. When are we moving? We've made contracts, or cancelled contracts; we've hired people, or laid them off at the end of October; we've signed leases, hired office space, done all sorts of things," Mr Hiroyasu Ito, chairman of the Tsukiji Market Association, told The Financial Times.

And then there are the cooling and water purification systems at Toyosu that have been switched on, but which merchants say cannot be turned off without damaging the equipment.

The chief of an intermediate wholesaler union, speaking to The Straits Times on condition of anonymity, slammed Tokyo for politicising the issue and for its persistent failure to take into account the voices of merchants.

Aside from the ongoing safety concerns, he cited a litany of issues, including how the smaller storefronts "frankly will make it impossible to do work". He also said the new site, which is only serviced by the Tokyo Monorail, is far less accessible than Tsukiji, which is within walking distance of Ginza.

"To make things worse, this has become a political issue with the revolving door of governors and the recent exposure of a massive screw-up after so many years," he added. A probe has been launched into whether Ms Koike's predecessors are also culpable. 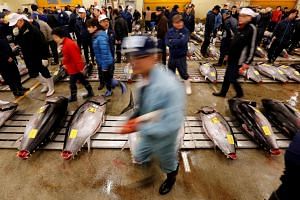 Tsukiji fish market to move to Toyosu, but will return within 5 years: Tokyo Governor Koike

A retired TMG official, who was not involved in decisions regarding Tsukiji and who also declined to be named, wondered if the ongoing saga will sully the "Toyosu" name even if environmental impact tests eventually prove it to be safe and the move were to take place.

"Just look at Fukushima, which has been tainted by the 2011 nuclear meltdown," he said. "Even if farmers there have begun exporting, they still suffer from worries over their crops. Will Toyosu ever be able to recover from this?"

Tsukiji wholesaler Yamaharu believes it will. It will move to Toyosu, as well as continue to run a stall in the newly-built Tsukiji building.

Its manager, Mr Tadahiro Oishi, 47, said: "The thinking is that, because Toyosu is so inconvenient and connected only by monorail, professional restaurant owners will go there while tourists will continue to come here."

A version of this article appeared in the print edition of The Straits Times on February 21, 2017, with the headline 'Tsukiji caught in a stink'. Subscribe
Topics:
More
Whatsapp Linkedin FB Messenger Telegram Reddit WeChat Pinterest Print Purchase Article Copy permalink