BEIJING (AFP) - The US special envoy for North Korea is visiting Beijing to coordinate policies with China, the US embassy said on Tuesday (March 26), a month after the failure of a denuclearisation summit.

Biegun's visit overlaps with the arrival of an unidentified high-ranking North Korean, who was greeted by Chinese government officials and Pyongyang's envoy to China on Tuesday, reported South Korea's Yonhap news agency.

It was not clear whether the visits by the US and North Korean officials were related.

The summit, their second in under a year, broke up without even a joint statement, and each sought to blame the other's intransigence for the deadlock.

Both sides pledged to continue talking, but no new meetings have been scheduled.

In mid-March, Biegun said Washington's goal was the complete denuclearisation of North Korea by the end of Trump's first term, and that it would not settle for incremental disarmament.

"We will not lift these sanctions until NK (North Korea) completes the process of denuclearisation," he said. 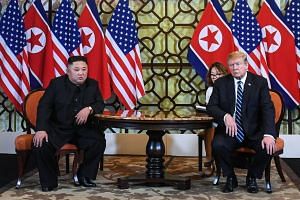 But on Friday Trump abruptly announced the cancellation of new sanctions on North Korea imposed by the US treasury.

China has played diplomatic wingman to North Korea - even loaning Kim an Air China jet to travel to his landmark meeting with Trump in Singapore last year - as Beijing is intent on keeping Pyongyang within its sphere of influence.

The North acts as a buffer state, keeping the 28,500 US troops in South Korea far from China's borders.

In January, Beijing hosted Kim for the fourth time prior to his Hanoi summit with Trump - something that has become somewhat of a ritual, with Kim briefing Chinese President Xi Jinping before and after his meetings with Trump and South Korean President Moon Jae-in.