SEOUL (KOREA HERALD/ASIA NEWS NETWORK, BLOOMBERG) - US President Donald Trump said he may delay a revamped trade deal the US reached with South Korea this week until after the nuclear confrontation with North Korea is resolved.

The remarks on a possible delay took some White House officials by surprise, and officials in South Korea were left confused.

"We regard the renegotiation of the free-trade agreement as having already been completed smoothly."

The presidential Blue House said it was "trying to verify his intention through various channels."

"We will try to find the true intention (behind President Trump's remark)," said a Cheong Wa Dae official.

"The trust between South Korea and the US remains unwavering regarding the issues of diplomatic security. We will have to look into the meaning as a joint statement (on the trade deal) was already 'fundamentally released' with (US Trade Representative) Robert Lighthizer." 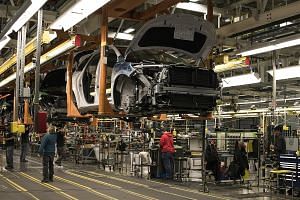 The US press office did not immediately respond to requests to clarify his intentions.

The US Trade Representative's office also had no immediate comment.

State Department spokeswoman Heather Nauert declined to comment on the president's remarks but said the trade agreement has yet to be finalised.

"We believe that this will be better for American workers and for the US economy," she said at a regular press briefing. "But this is not a done deal. It's not a final agreement."

Experts in South Korea are interpreting Trump's remarks as a message to South Korea that it will keep an eye on the Moon Jae In government's steps throughout the inter-Korean summit, which is happening on April 27, and the US-North Korea talks that are expected to follow.

Calling the trade deal a "very strong card", Trump hinted it could be used as leverage to get Seoul to do more to denuclearise the North, reported Yonhap news agency.

"I may hold it up 'til after a deal is made with North Korea," Trump said during a speech on infrastructure in Ohio on Thursday.

He added, "We'll probably hold that deal up for a little while, see how it all plays out."

"I want to make sure everyone is treated fairly," Trump said. "And we're moving along very nicely with North Korea. We'll see what happens."

It was unclear what leverage Trump believed he could gain in the North Korea talks by delaying the deal with the South.

North Korea's leader Kim Jong Un, in his recently-concluded summit with Chinese counterpart Xi Jinping in Beijing, said the issue of denuclearisation of the Korean Peninsula can be "resolved" if South Korea and the US "respond to our efforts with goodwill, create an atmosphere of peace and stability while taking progressive and synchronous measures for the realisation of peace."

"North Korea has called for South Korea and the US to take a 'progressive and synchronous' approach towards the issue of denuclearisation, but the US may be considering drawing a different measure for the issue," Shin Beom Chul, a professor at the Korea National Diplomatic Academy (KNDA) said.

Others say that Trump's remark was aimed at pleasing Trump's domestic audience and supporters given the timing and location of the speech. Trump was speaking to construction workers in Ohio on Thursday.

Je Hyun Jung, a deputy general manager at the Korea International Trade Association said:"Trump's remarks were a political gesture to show he is in control of both the North and South Korean issues, rather than a sign of dissatisfaction of the Korus negotiation."

"Trump can't sign off on the deal now anyway as it takes some time for the two countries to settle details of Korus, at least a month or two," she said, referring to the US-South Korean Trade Agreement (KORUS).

Min Jeong Hun, another professor at KNDA, said:"The US is preparing for the 2018 midterm elections and some voters are not pleased with the result of the recent trade deal with South Korea -- it's just Trump's way of words in winning the hearts of his supporters."

Shortly after the revised pact was announced on Wednesday, Trump hailed it as a "great deal for American and Korean workers" and said: "Let's now focus on our important security relationship."

Earlier this month Trump also made remarks suggesting he could withdraw US troops from South Korea if a trade deal was not reached.