WASHINGTON • US President Donald Trump has taken to Twitter to warn China not to wait to do a trade deal with the United States, just as negotiations began in Shanghai to resurrect stalled bilateral talks.

"My team is negotiating with them now, but they always change the deal in the end to their benefit," Mr Trump tweeted yesterday.

"China is doing very badly... was supposed to start buying our agricultural product now - no signs that they are doing so. That is the problem with China, they just don't come through," his tweet added.

The negotiations are the first face-to-face talks since Mr Trump agreed to a truce with Chinese President Xi Jinping at last month's G-20 summit.

The US economy "has become MUCH larger than the Chinese economy the last three years", Mr Trump boasted.

The US President suggested that China "should probably wait out our election to see if we get one of the Democrat stiffs like Sleepy Joe. Then they could make a GREAT deal, like in past 30 years, and continue... to rip-off the US, even bigger and better than ever before".

The "Sleepy Joe" reference is to the 2020 presidential election and former US vice-president Joe Biden, the current Democratic Party front runner for the nomination.

"The problem with them waiting, however, is that if & when I win, the deal that they get will be much tougher than what we are negotiating now... or no deal at all. We have all the cards, our past leaders never got it!" he added. 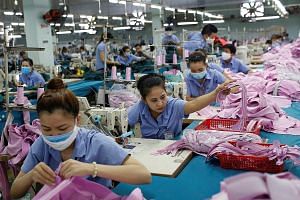 "China has lost five million jobs and two million manufacturing jobs due to Trump tariffs. Trump's got China back on its heels, and the United States is doing great," he tweeted.

Mr Trump later told reporters at the White House that talks were going well with China, but added that the US would "either make a great deal or no deal at all".

"If China had their wish, they'd wait till after the election, they'll pray that Trump loses," he said.

US delegates including Treasury Secretary Steven Mnuchin and Trade Representative Robert Lighthizer arrived in Shanghai yesterday to begin talks with their Chinese counterparts.

The two sides are further apart than they were three months ago, when negotiations broke down and each side blamed the other for derailing attempts to reach a deal.

Since the initial tariffs took effect in June last year, Washington and Beijing have so far hit each other with punitive tariffs covering more than US$360 billion (S$494 billion) in two-way trade.

An editorial in the state-run China Daily said yesterday that Shanghai was an "auspicious" venue to re-start the trade talks, and referenced the visit by former US president Richard Nixon there in 1972 in the course of a diplomatic thaw between the sides.

"It may be just a coincidence that this round of talks is being held in Shanghai, where 47 years ago, the two sides signed the Shanghai Communique that laid the foundation for the normalisation of bilateral relations," according to the editorial.

"The differences that existed then between the two countries after decades of estrangement were definitely much greater than they are today."

A version of this article appeared in the print edition of The Straits Times on July 31, 2019, with the headline 'Trump warns China to make trade deal before US elections'. Subscribe
Topics:
More
Whatsapp Linkedin FB Messenger Telegram Reddit WeChat Pinterest Print Copy permalink