He says it makes sense for Pyongyang to cut a deal that is good for its people, but stressed US is ready to assert military might

US President Donald Trump has urged North Korea to "come to the table and make a deal", even as he stressed that the United States is prepared to assert its military might, if needed, to defend itself and its allies.

Speaking at a joint press conference with South Korean President Moon Jae In after their summit yesterday, Mr Trump also called on the world to unite in confronting the nuclear threat and "prevent the North Korean dictator from threatening millions of innocent lives".

"We are showing great strength, and I think they understand we have unparalleled strength. With that said, I really believe it makes sense for North Korea to come to the table and make a deal that is good for the people of North Korea and the people of the world," he said.

While declining to comment on the possibility of direct talks, Mr Trump said the US will focus on resolving the problem "using all available tools short of military action".

Mr Trump's visit to South Korea, part of a 12-day Asian tour, came after North Korea raised tensions by firing missiles over Japan, conducting its sixth nuclear test and hurling threats at the US.

While Pyongyang has not staged any provocation since Sept 15, it has ruled out talks and vowed to continue boosting its nuclear prowess if the US and its allies "continue their hostile acts against us".

"It is unacceptable that nations would help arm and finance an increasingly dangerous regime." 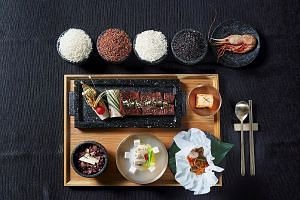 Show of force planned by 3 US aircraft carrier groups

To further deter the North, Mr Moon and Mr Trump agreed to boost South Korea's defence capability. This includes removing the payload limit of South Korean ballistic missiles, expanding the rotational deployment of US strategic assets to the region and buying advanced US surveillance equipment.

The additional defence spending would help to narrow the US trade deficit with South Korea, said Mr Trump, who stressed that ongoing renegotiations of a US-South Korea free trade deal will make it more fair and balanced in America's favour. He thanked Mr Moon for helping to reduce the US trade deficit of US$27.6 billion (S$37.7 billion) last year - more than double the figure in 2012 when the agreement went into effect.

Mr Trump was also full of praise for Camp Humphreys - the biggest US base overseas - and did not press Seoul further to bear a bigger share of the cost of maintaining 28,000 US troops in this country.

Assuaging concerns that South Korea was playing second fiddle to America's other ally, Japan, and would be bypassed in important decisions, he said: "South Korea is very important to me, and there will be no skipping South Korea."

Analysts said the summit ended on a good note as the South Korean government had worked hard to allay Mr Trump's concerns over the trade deficit and defence cost sharing.

The Camp Humphreys visit, for instance, was meant to show how South Korea paid 92 per cent of the construction bill of US$10.7 billion.

Dr James Kim of The Asan Institute for Policy Studies said major issues had been sorted out at meetings prior to the summit.

"Overall, it was a cordial affair that ended well. No major issues or statements that surprised anyone."