WASHINGTON (REUTERS) - US President Donald Trump said on Wednesday (March 13) he was in no rush to complete a trade pact with China and insisted that any deal include protection for intellectual property, a major sticking point between the two sides during months of negotiations.

Trump and Chinese President Xi Jinping had been expected to hold a summit at the president's Mar-a-Lago property in Florida later this month, but no date has been set for a meeting and no in-person talks between their trade teams have been held in more than two weeks.

The president, speaking to reporters at the White House, said he thought there was a good chance a deal would be made, in part because China wanted one after suffering from U.S. tariffs on its goods.

But he acknowledged Xi may be wary of coming to a summit without an agreement in hand after seeing Trump end a separate summit in Vietnam with North Korean leader Kim Jong Un without a peace deal.

"I think President Xi saw that I'm somebody that believes in walking when the deal is not done, and you know there's always a chance it could happen and he probably wouldn't want that,"Trump said.

The president, who likes to emphasise his own deal-making abilities, said an agreement to end a months-long trade war could be finished ahead of a presidential meeting or completed in-person with his counterpart.

"We could do it either way. We could have the deal completed and come and sign, or we could get the deal almost completed and negotiate some of the final points. I would prefer that," he said. 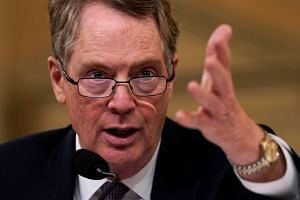 Trump decided last month not to increase tariffs on Chinese goods at the beginning of March, giving a nod to the success of negotiations so far.

Asked on Wednesday if intellectual property had to be included in a trade deal, Trump said: "Yes it does." He indicated that from his perspective, a meeting with Xi was still likely.

"I think things are going along very well - we'll just see what the date is," Trump told reporters at the White House.

Though Trump said he is not in a hurry, a trade deal this spring would give him a win to cite as an economic accomplishment as he advances his 2020 re-election campaign. The trade war has hurt the global economy and hung over stock markets, which would likely benefit from an end to the tensions.

In addition to smoothing over sticking points on content, the United States is eager to include a strong enforcement mechanism in a deal to ensure that Beijing can be held accountable if it breaks any of its terms.

US Trade Representative Robert Lighthizer, who has spearheaded the talks from the American side, said on Tuesday that US officials hoped they were in the final weeks of their talks with China but that major issues remained to be resolved.