HANOI  (AFP, Reuters) - US President Donald Trump said on Sunday (Nov 12) called for peace with North Korea but acknowledged Pyongyang has continued  to provoke America and the world with its nuclear threats.

Speaking alongside Vietnam's president, Tran Dai Quang, Trump said in live updates published by CNN:"We don't want that. We want stability, not chaos. And we want peace, not war."

He said that it was possible he could be friends with North Korean leader Kim Jong Un one day and that it would be “very, very nice” but he was not sure that it would happen, reported Reuters.

Asked at a news conference in Vietnam if he could see himself being friends with Kim, Trump said: “That might be a strange thing to happen but it’s a possibility.

“If it did happen it could be a good thing I can tell you for North Korea, but it could also be good for a lot of other places and be good for the rest the world,” Trump said.

“It could be something that could happen. I don’t know if it will but it would be very, very nice.”

Earlier on Sunday, Trump tweeted he would never call Kim Jong Un "short and fat", after months of trading personal insults and threats of war with the North Korean leader.

The US leader, who is in Vietnam on a state visit after attending Apec summit, had marked the Vietnam War in Hanoi on Sunday, touting the fact that the United States have “achieved peace” out of “war and conflict”.

Trump also called for "fair and reciprocal" trade, a message he has repeated many times since he kicked off his five-nation Asia tour on Nov 5 in Japan.

"We look forward to achieving a bilateral trade agreement with partners who abide by the principles of fair and reciprocal trade," he said.

Trump also said that he was prepared to mediate between claimants to the South China Sea, which include Vietnam and China.

"If I can help mediate or arbitrate, please let me know,"Trump said in comments  carried by pool reports.

Trump acknowledged that China's position on the South China Sea, nearly all of which is claimed by Beijing, was a problem.

"I'm a very good mediator and arbitrator," he said. 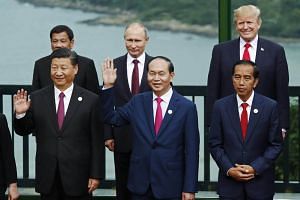 He also said that China was helping to resolve tensions over North Korea and added he hoped Russia would do the same.

Vietnam has also reclaimed land around reefs and islets, but on nowhere near the same scale as China.

The South China Sea was discussed in Beijing on an earlier leg of Trump’s 12-day Asian tour and U.S. Secretary of State Rex Tillerson said the United States and China had a frank exchange of views.

The United States has angered China with freedom of navigation patrols close to Chinese-controlled islands, which have been continued by the Trump administration.

In August, foreign ministers of Southeast Asia and China adopted a negotiating framework for a code of conduct in the South China Sea, a move they hailed as progress but one seen by critics as a tactic to buy China time to consolidate its maritime power.

The framework seeks to advance a 2002 Declaration of Conduct (DOC) of Parties in the South China Sea, which has mostly been ignored by claimant states, particularly China, which has built seven man-made islands in disputed waters, three of them equipped with runways, surface-to-air missiles and radars.

All parties say the framework is only an outline for how the code will be established but critics say the failure to outline, as an initial objective, the need to make the code legally binding and enforceable, or have a dispute resolution mechanism, raises doubts about how effective the pact will be.

The framework will be endorsed by China and members of the Association of Southeast Asian Nations (Asean) at a summit in Manila on Monday, a diplomat from one of the regional bloc’s countries said.  The next step is for Asean and China to start formal consultations and negotiations for the actual Code of Conduct, and the earliest that talks on this can start is February 2018, the diplomat said.