SEOUL (THE KOREA HERALD/ASIA NEWS NETWORK) - US President Donald Trump has said that a formal end to the decades-old Korean war would be on the negotiating table when he meets North Korean leader Kim Jong Un in Singapore next week.

A Seoul-based security expert told The Korea Herald the deal to declare an end to the Korea War could be reached as soon as the day after their meeting on June 12.

While the move is more of a symbolic gesture than a decision with legal effect, it is necessary to ease North Korea's concerns over their security during the arduous denuclearisation process until the current armistice agreement is replaced by a peace treaty, said Mr Cho Sung Ryul. He is a senior researcher at the Institute for National Security Strategy and a member of advisory group for President Moon Jae In.

"Declaring an end to the Korean War is like providing a political guarantee for North Korea's security concerns during the transitional period of denuclearisation," Mr Cho told The Korea Herald on Saturday.

"Even if North Korea decides to surrender its nuclear weapons, the process would take years. In the meantime, North Korea would become nervous about the security vacuum. So the idea is helpful in easing North Koreans' jitters and encouraging them to do more on denuclearisation."

Mr Cho said President Moon could travel to Singapore in time for the Trump-Kim summit and join the two leaders in reaching a trilateral agreement to end the Korean War.

In 2007, the Roh Moo Hyun administration has attempted to convince the George W. Bush administration to work with North Korea and China to declare an end to the Korean War, which ended with armistice, not a peace treaty. 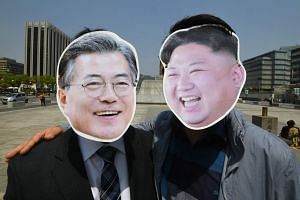 High hopes but pitfalls ahead, especially on issue of disarmament

President Moon was then the chief of staff to the liberal South Korean leader.

But the Roh administration was replaced by the conservative Lee Myung Bak administration in December that year (2007), and afterward President Barrack Obama came into office in the US.

"The previous attempts at declaring an end to the Korean War failed because we didn't have much time. If we return to past mistakes and (let things) drag on, we would lose the once-in-a-lifetime opportunity," said Mr Cho.

The upcoming Trump-Kim summit now offers an once-in-a-lifetime opportunity to achieve what leaders failed to achieve in 2007 as current leaders in Seoul and Washington have more time to push for the initiative.

Analysts have said that any peace treaty to replace the armistice will likely have to involve China, which is one of the three signatories. The others are the US-led United Nations Command and North Korea.

When President Moon proposed the idea of holding three-way talks among the two Koreas and the US to declare an end to Korean War, the Chinese government criticised it as an attempt to exclude Beijing and said the country should be involved as a "major stakeholder" in inter-Korean affairs.

Mr Cho said that while he did not oppose China's participation in declaring an end to the Korean War, Beijing's involvement must come after the two Koreas and the US reach an agreement and that there is no need for the three countries to wait for Beijing's participation.

"If Beijing want to be involved in the process, we don't have to prevent them from doing so. But I don't think President Moon and Trump should wait on declaring an end to the Korean War until President Xi Jinping flies to Singapore," Mr Cho said.

"Since China has already normalised relations with South Korea and the US, I don't think there is much case for justifying China's involvement in the process… I don't think we should pass up such an opportunity simply because of China."

When it comes to the negotiations with North Korea, he stressed that the devil is not only in the details of denuclearisation process but also in the timelines of political schedules in Seoul and Washington.

While Trump indicated that denuclearisation talks would be a drawn-out process during his meeting with Kim Jong Un's top aide Kim Yong Chol on Friday, Mr Cho said Trump should set a detailed milestone for achieving key elements of denuclearisation -- at least by mid-2020 before the US presidential election.

Unlike Kim Jong Un and his dictatorial predecessors who do not have to worry about their political schedule, the democratically elected leaders in South Korea and the US are often pressed for time to push their initiatives during their terms, Mr Cho added.

"By 2020, we need to see key elements of denuclearisation accomplished. For that, I think President Trump has 2 and a half years left," said Mr Cho, adding that President Moon should also come up with his own timeline as the next presidential election is in 2022.

The first process is likely to involve declaration and inspection of North Korea's "current and future" nuclear materials by international nuclear inspectors - such as plutonium in its Yongbyon nuclear facility and hidden highly enriched uranium.

Dismantling intercontinental ballistic missiles, which Trump alluded to as a main agenda item for the upcoming summit, should be addressed during the first stage. In the meantime, North Korea should keep its moratorium on nuclear and ICBM tests, Cho said.

The second process would focus on eliminating North Korea's "previous" nuclear capabilities, such as existing nuclear warheads and production facilities. The warheads need to be shipped out of country and the facilities should be "disabled," Cho said.

"The first process is largely about building trust until such time there would be complete, verifiable denuclearisation of North Korea and normalising of diplomatic relations between the US and North Korea," said Mr Cho.

"If we don't do it on a phased basis, then we can put all things in one basket. In return for the US security guarantee of the North Korean regime, North Korea can agree to dismantle nuclear facilities and remove nuclear warheads from the country. After all, Kim Jong Un's decision is most crucial."

Mr Cho countered scepticism in Washington that President Trump has made too many concessions on North Korea.

When declaring his summit with Mr Kim was back on, Mr Trump appeared to lean towards Pyongyang's approach of a phased approach towards denuclearization and stop increasing pressure while talks proceed.

The expert noted Mr Trump's announcement that the summit was back on on came after North Korea's demonstrated it was committed to denuclearisation, which was expressed during Mr Kim's recent meetings with President Moon and visiting Russian Foreign Minister Sergey Lavrov and the May 24 shutdown of the Punggyeri nuclear test site.

The obstacle to further negotiations, Mr Cho asserted, is rather the US' reluctance to accept any "transactional deal" with North Korea - an approach criticised as unorthodox by the US foreign policy officials and experts.

"I think the US still sees the negotiation with North Korea from the perspective of American exceptionalism. Instead of seeking a fair transaction, they still want to see North Korea give in to the US demands first,"Mr Cho said.

Fueling the concept is what he saw as a misplaced belief in Washington that crippling economic sanctions changed North Korea's strategic calculus and made the communist country eager to seek a deal with the US, according to Mr Cho.

Mr Cho suggested that the reason for North Korea's return to the negotiation table was totally different.

North Korea wants to negotiate with the US on an equal footing, as it believes it has achieved "balancing power" against the US by achieving full-fledged nuclear capabilities, he noted.

"With ICBM capable of reaching the US continent, I think North Korea believes that they have secured enough leverage against the US. If we can't read into it, we might return to past failures," Mr Cho said.