Better known for his sharp criticism of the Trump administration, Mr Friedman startled some in the audience at a public lecture in Singapore yesterday when he said he agreed with the President on the testiest dimension of US-China ties.

The lecture, part of the school's Festival of Ideas that kicked off on Wednesday, features leaders from academia, as well as public and private sectors to discuss public policy challenges.

The roiling of relations between the world's two biggest economies has choked growth across the world, but Mr Friedman holds that Mr Trump was right to take on China because it did not play fair.

"China grew from poverty to middle income over the last 30 years by using a three-silo strategy," he said.

The strategy incorporated elements like hard work, smart investments in infrastructure and education. But it also included intellectual property rights infringement and forced tech transfer, he added. Further, China used the stability provided by the US Pacific Fleet to extend its economic domination of the region without appearing to pose a geopolitical threat.

But now, said Mr Friedman, China wants to transform from a middle-income to a rich economy by dominating the high-tech industry. "If we let China use that same three-silo strategy, we would be out of our minds," he said.

Mr Trump, however, failed to latch on to the winning argument in the fight. "We had the chance to make this the world versus China on what are right trade rules for the 21st century," added Mr Friedman. 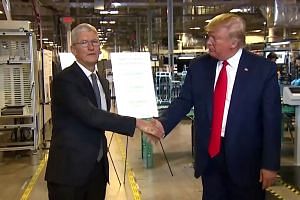 Trump considering whether Apple should be exempt from China tariffs

Trump says China tariffs will go 'even higher' without deal

Mr Friedman suggested that had Mr Trump styled the trade war as a global push to reform terms of trade, it could have mobilised reformers inside China.

In his lecture, Mr Friedman dwelt on the theme from his book, Thank You For Being Late: An Optimist's Guide To Thriving In The Age Of Accelerations.

It examines exponential changes in technology, globalisation and climate change and how these are reshaping politics, society, workplaces and geopolitics.