TOKYO (REUTERS, AFP) - US President Donald Trump, charging “Japan has been winning” on trade in recent decades, said he would push for more reciprocal trade with Washington’s close US ally – but in a friendly way.

Trump was speaking in Tokyo on the second day of a 12-day Asian trip expected to be dominated by North Korea and trade.

“We have to do more. The United States has suffered massive trade deficits at the hands of Japan for many, many years,” Trump said at the start of a meeting with Japanese business leaders.

“We have to negotiate,” he said, adding it would be done in a friendly manner.

Trump also said Washington wants to make the United States the most attractive place to hire, invest and grow.

“We want free and reciprocal trade, but right now, our trade with Japan is not free and it’s not reciprocal, but I know that it will be,” he said. 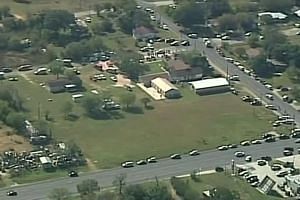 Japan had a US$69-billion (S$94-billion)  trade surplus with the United States last year, according to the US Treasury Department.

The US leader, who met Japanese Prime Minister Shinzo Abe on Sunday for golf, lunch and dinner, will hold a more formal summit with Abe later on Monday.

In a second round of economic talks in Washington last month, US Vice-President Mike Pence and Japanese Finance Minister Taro Aso, who doubles as deputy premier, failed to bridge differences on thorny trade issues.

The two sides remain at odds over how to frame future trade talks, with Tokyo pushing back against US calls to discuss a bilateral free trade agreement (FTA).

Trump also said that an Indo-Pacific trade framework would produce more in trade that the Trans-Pacific Partnership pact pushed by his predecessor but which he announced Washington would abandon soon after he took office.

“TPP was not the right answer,” he said, adding he knew not everyone in his audience agreed.

“We will have much bigger trade with the way we are doing it right now and it will be a much less complex situation.”

The 11 remaining nations in the TPP, to which Japan’s Abe is firmly committed, are edging closer to sealing a comprehensive free trade pact without the United States.

The president's comments come on the second day of an Asian tour set to be dominated by the North Korea crisis but US officials have also made it clear that trade is high on their agenda. The White House has sought to emphasise the length of the five-nation tour - the longest by any US president since George H.W. Bush in 1991 - as evidence of Trump's commitment to engaging with the region.

Trump on Monday condemned what he described as a "horrific shooting," after 26 people were killed in a rampage at a Texas church.

"This act of evil occurred as the victims and their families were in their place of worship. Our hearts are broken,"he told business leaders on day two of his Asian trip.

"We pull together, we join arms... through the tears and the sadness we stand strong," added the president.

A gunman stormed into a Baptist church during Sunday morning services and killed at least 26 people.

The shooter, whose motives were not immediately clear, was dressed all in black and wearing a ballistic vest, the authorities said.

Though officials did not identify the gunman, multiple media outlets named him as Devin Patrick Kelley, 26, adding that he had been dishonourably discharged from the Air Force.

He also died in the assault.