He hopes RCEP will be signed soon, and welcomes China and others to join CPTPP

If trade tensions between the United States and China escalate into a trade war, the multilateral trading system that has brought prosperity to many countries for decades will be "severely undermined", Prime Minister Lee Hsien Loong has said.

He was responding to a question from the Communist Party's official People's Daily newspaper on regional trade arrangements in the Asia-Pacific, when he commented on the tit-for-tat tariff stand-off between the two economic giants that has roiled financial markets amid rising fears of a trade war.

"As a small nation with an open economy, Singapore is heavily dependent on international trade," he said. "There will be no winners in a trade war." The interview is published today, at the start of Mr Lee's five-day working visit to China. It covers topics such as China's relations with Singapore and Asean, regional trade and cultural ties.

Mr Lee will meet Premier Li Keqiang in Beijing today, where they will witness the signing of memorandums of understanding on bilateral cooperation between their two countries. Mr Lee will also meet Vice-President Wang Qishan in the Chinese capital, and later Shanghai party boss Li Qiang in China's economic hub.

Mr Lee will also attend the Boao Forum for Asia annual conference on Hainan island, where he will give a speech, and have a bilateral meeting with President Xi Jinping.

In the interview, a copy of which was given to The Sunday Times by the Prime Minister's Office, Mr Lee said that while globalisation and international trade have underpinned the growth of many countries, the political mood was shifting in some of them. The US, long an advocate of free trade and economic multilateralism, has taken a "radically different approach towards trade". In recent weeks, it has announced tariffs on steel and aluminium imports and threatened to impose further tariffs on Chinese imports to protect its domestic industries and reduce bilateral trade deficits. These measures have put pressure on its relations with China and other countries, said Mr Lee.

He noted that China's decision to join the World Trade Organisation (WTO) in 2001 was a bold one, and it has committed to abide by multilateral rules, including submitting to WTO dispute settlement mechanism, and benefited from doing this. 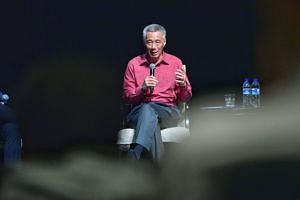 "Since 2001, China's economy has developed greatly," he said, adding that its share of global GDP has risen dramatically. "It is therefore natural that other countries expect China to take on more commitments and contribute more to the global system, by further opening market access for trade in goods and services, and liberalising rules for foreign investments into China," he said.

"These steps would better match China's present stage of development. China can do so on a multilateral basis, or through FTAs (free-trade agreements) with regional partners," he added.

Mr Lee welcomed China and others to join the Comprehensive and Progressive Agreement for Trans-Pacific Partnership (CPTPP), which 11 Asia-Pacific nations inked last month, when they are ready.

He also hoped the Regional Comprehensive Economic Partnership (RCEP) - an Asean-led regional trade pact of which China is a part - will be signed this year. "If we can sign the RCEP this year, it will, together with the CPTPP, send a clear signal to the world about our commitment to multilateral trade, and our resolve to keep the regional architecture open and inclusive."