Discussions hinge on US attitude; Beijing willing to meet legitimate rare earth needs of other nations

BEIJING • China said that the next move in trade talks must come from the United States, days after President Donald Trump said he is in no hurry to make a deal.

"The US keeps escalating the trade tensions and makes various tricks, which has severely hurt the trade talks," Chinese Ministry of Commerce spokesman Gao Feng said in Beijing. "Whether the China-US trade talks can make any progress largely hinges on the US attitude and sincerity."

Wrong US actions damaged the talks and forced China to retaliate, Mr Gao said. China hopes the US corrects its mistakes, but will fight to the end if the US keeps escalating tensions, he said yesterday.

Since the collapse of talks earlier this month, the dispute between the two countries has worsened, with Washington restricting access to high-tech products and Beijing hinting that it will cut off exports of rare earth products that are necessary for industry.

In response to a question on whether China would use its dominant position in rare earths to retaliate, Mr Gao repeated a previous government statement that while China would prioritise do-mestic demand, it was willing to meet the legitimate needs of the rest of the world.

"However, if any country wants to use products made using China's rare earth exports to contain and crack down on China's development, that can't be accepted emotionally and rationally," he added.

When asked if China would retaliate against Apple and other American firms doing business in China, Mr Gao said that China would protect the legitimate rights of foreign businesses, without elaborating. 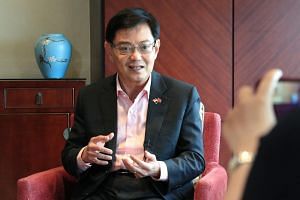 On Wednesday, Chinese state media said that US companies are years away from challenging Chinese dominance of rare earth minerals due to a lack of domestic processing facilities, ensuring that the Asian nation will maintain its near-monopoly on refining and powerful leverage in trade talks.

In an escalation of the trade conflict between the two countries, state media implied that China could restrict rare earth sales to the US, stoking fears about Beijing's role as a supplier.

President Xi Jinping's visit to a rare earths plant last week had sparked speculation that China would use its dominant position as an exporter of rare earths to the US as leverage in the trade war.

While China contains only a third of the world's rare earth reserves, it accounts for 80 per cent of US imports of the group of 17 minerals used in military equipment and high-tech consumer electronics, according to US Geological Survey data. That is largely due to China's domination in processing.

Efforts to build rare earth pro-cessing plants in the US are still in the early stages and lack unified support from Congress and the Trump administration.

At least three US-based companies have rare earth processing plants under construction or in the planning stages.

One is set to open next year at the Mountain Pass mine in California, when it will become the sole operating rare earth processor in the US. It is set to produce about 5,000 tonnes of two popular types of rare earth annually, said a source familiar with the matter.

The other two are not expected to open until 2022, at the earliest.

The US has excluded Chinese rare earth imports from recent tariff hikes, along with some other critical Chinese minerals. China, however, has raised tariffs on imports of US rare earth metal ores from 10 per cent to 25 per cent, making it less economical to process the material in China. 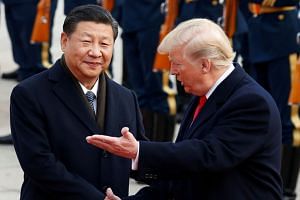 The world's top two economies are at loggerheads as trade talks have apparently stalled, with President Trump increasing tariffs on US$200 billion (S$276 billion) worth of Chinese goods earlier this month and blacklisting Chinese telecommunications giant Huawei.

"We are against the trade war, but we are not afraid of it," Deputy Foreign Minister Zhang Hanhui said at a media briefing yesterday to preview President Xi's trip to Russia next week.

"This premeditated instigation of a trade conflict is naked economic terrorism, economic chauvinism and economic bullying," Mr Zhang said, stressing that China opposes the systematic use of sanctions, tariffs and protectionism.

"There is no winner in a trade war," he warned.

China has hit back with its own tariff increase on US$60 billion worth of US products that will take effect tomorrow.

A version of this article appeared in the print edition of The Straits Times on May 31, 2019, with the headline 'Trade talks: It's up to US now, says China'. Subscribe
Topics:
More
Whatsapp Linkedin FB Messenger Telegram Reddit WeChat Pinterest Print Copy permalink