TAIPEI (AFP) - Top Taiwanese athletes on Wednesday (Nov 21) urged the public to vote against changing the island's name at international sports events in a referendum this weekend, amid worries the move may jeopardise their right to compete.

Voters will decide on Saturday (Nov 24) if they want the island to compete as "Taiwan" instead of "Chinese Taipei" in a controversial referendum that has already angered Beijing.

China claims sovereignty over self-ruling, democratic Taiwan, and is particularly sensitive to the island's use of names, emblems and flags at international events.

These sensitivities mean Taiwan is forced to compete as Chinese Taipei - a name agreed upon in 1981 - at the Olympics and other international sports competitions.

Around 100 athletes and coaches gathered at the Chinese Taipei Olympic Committee (CTOC), holding placards reading "I want to join the Olympics", "Support Chinese Taipei", and "Politics should not interfere in sports".

The International Olympic Committee (IOC) has warned Taiwan that it could lose its right to compete if it tries to change its name for the 2020 Summer Games in Tokyo.

In a letter to CTOC last week, the IOC said any name change was "under its jurisdiction" and warned of consequences if it felt there was political interference. 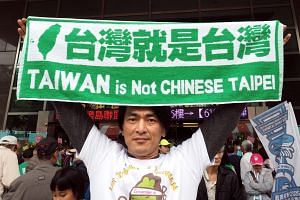 "I hope everyone will... vote 'no' in the referendum to support the athletes and not to sacrifice their rights to compete," said double Olympic weightlifting champion Hsu Shu-ching.

The IOC has said it would see any attempts to pressure Taiwan's national committee as external interference that could lead to "protective measures".

The local committee has already expressed concern that the island could lose its IOC membership over the issue.

"The government's consistent position is to protect the athletes' right to compete for our country, to ensure CTOC's membership and abide by IOC rules," it said in a statement.

The name-change campaign has already irked China, which was blamed for the cancellation of an international youth event due to be held in Taiwan next year.

"Your every vote concerns our future," sprinter Yang Chun-han told reporters. "I hope everyone will think clearly."