TOKYO (REUTERS) - The mascots for the Tokyo 2020 Olympic and Paralympic Games were named during a ceremony in the Japanese capital on Sunday (July 22).

The Olympic mascot, a blue-checked pointy-eared figure, was named as Miraitowa - combining the Japanese words 'mirai', meaning future, and 'towa', which means eternity.

The Paralympic counterpart, who is pink-checked and wears a cape, was named Someity after a variety of cherry blossom called Someiyoshino. Games organisers also said the name sounded similar to "so mighty" in English.

The mascots were revealed in February but remained unnamed until Sunday.

They were designed by illustrator Ryo Taniguchi, who won a nationwide competition that was determined by Japanese children, with his entries clinching more than half the total votes.

Tokyo 2020 president and former Japanese prime minister Yoshiro Mori was present at the unveiling and delivered a message of inclusion.

"You are part of the Olympics as well," Mori told the assembled children. 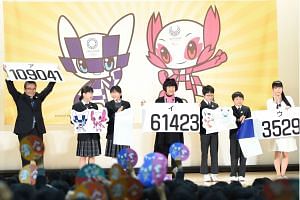 "You chose these two characters. We had roughly five million students who chose these so the Olympics belongs to everyone, not just the athletes, everyone.

"We are hoping everyone will unite as one and we hope to achieve a great success and to do so we will need everyone's cooperation."

In a country that has a fondness for mascots, Tokyo 2020 organisers sought to create lovable characters for the Games with both selections said to have superpowers and an ability to teleport between the digital world and reality.

After the ceremony, the mascots reappeared on a boat that cruised down the Sumida river, waving to children on the riverbank as they passed some of Tokyo's most iconic landmarks.