In its editorial on September 21, the paper says Prime Minister Lee Hsien Loong's recent visit is being seen as a sign that soured bilateral ties are recovering.

BEIJING (CHINA DAILY/ASIA NEWS NETWORK) - To everyone concerned about the recent vicissitudes in China-Singapore relations, Singapore Prime Minister Lee Hsien Loong's ongoing China visit, his first state visit since August 2013, is welcome, and it is being perceived as a sign that the soured bilateral ties are recovering.

After months of unease in their relations, the timing alone－before Lee's planned visit to the United States and the Communist Party of China's upcoming national congress－has bestowed Lee's visit with unusual symbolism, with many reading it as Singapore "repositioning" itself and recalibrating its strategic compass.

Singapore may have been seeking to try and weigh and balance relations with big countries, but a number of unpleasant episodes over the past year sowed rare discomfort between Beijing and Singapore.

These began with Singapore urging China to accept the Manila-initiated international "arbitration" over the South China Sea dispute, which Beijing rejected as being illegal and invalid, and culminated in Lee's eye-catching absence from the Belt and Road Forum for International Cooperation in May.

However, China-Singapore relations are resilient and they are able to weather such vicissitudes, in part due to the special thread of kinship between them－the majority of Singaporeans being of Chinese origin, a bond that determines a natural closeness.

And from a more utilitarian perspective, China is Singapore's largest trade partner and Singapore is China's largest source of foreign investment. 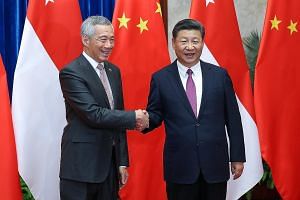 Singapore has helped China tremendously in its pursuit of development. The joint venture programs Lee is visiting in Xiamen, East China's Fujian province, are fine examples of their fruitful partnership. And China's pro-globalisation development initiatives, the Belt and Road in particular, will prove more than rewarding to Singapore should it choose to join in.

Singapore holds special significance to Chinese diplomacy not only because of its longstanding role as "middleman" between China and the West, but also because it is the current official coordinator of China-Asean relations, and will assume the presidency of Asean next year.

Right before coming to China, Lee said if overall relations are good, a steady stream of economic and trade cooperation projects will naturally ensue.

His visit is certainly helping to revive the two sides' previous strong rapport, and clearing the way for the said stream of mutually beneficial projects.

Yet although not widely reported, the fact is, high-level exchanges between the two sides have never stopped, and that, along with Lee's exchange of vows with his Chinese hosts to deepen political trust and upgrade economic cooperation, prove the foundations of bilateral ties are still sound and solid.