The comments came after the former ExxonMobil chief executive told US senators at his confirmation hearing he would seek to deny Beijing access to the artificial islands it has been building in the South China Sea. China's actions in the region are comparable to Russia's invasion of Crimea, he said, a comment that did not sit well with the Asian giant.

"Unless Washington plans to wage a large-scale war in the South China Sea, any other approaches to prevent China access to the islands will be foolish," the nationalistic Global Times newspaper wrote in an editorial. "Tillerson had better bone up on nuclear power strategies if he wants to force a big nuclear power to withdraw from its own territories," the paper added.

The English-language China Daily took a similar line: "It is certainly no small matter for a man intended to be the US diplomat-in-chief to display such undisguised animosity towards China."

Satellite photos show China has been hard at work building military facilities in the contested waters, which are also claimed by the Philippines and Vietnam, among others. 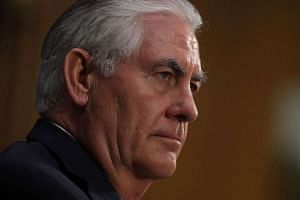 Under US President Barack Obama, Washington has claimed that Beijing's activities in the region threaten freedom of navigation and overflight. But it has not taken a position on the ownership of the islets, reefs and shoals that sit in one of the world's hot spots.

Mr Tillerson, however, explicitly said that the territories "are not rightfully China's".

The official reaction in Beijing was muted, with Foreign Ministry spokesman Lu Kang urging Washington to mind its own business.

"The South China Sea situation has cooled down, and we hope non- regional countries can respect the consensus that it is in the fundamental interest of the whole world," he said.

The two Chinese papers, despite their warnings, agreed it was too early to tell if Mr Tillerson's words were more bark than bite.

But the Global Times warned that "if Mr Trump's diplomatic team shapes future Sino-US ties as it is doing now, the two sides had better prepare for a military clash".

Outgoing Secretary of State John Kerry said yesterday that he was confident the next administration would stick to the same peaceful principles on Asian security as the current one.

Foreign Secretary Perfecto Yasay of the Philippines, which is seeking to improve ties with China, said any US action to drive China from the artificial islands would be its own prerogative, and in its own national interest.

A version of this article appeared in the print edition of The Straits Times on January 14, 2017, with the headline 'Tillerson warned to mind his words by Chinese media'. Subscribe
Topics:
More
Whatsapp Linkedin FB Messenger Telegram Reddit WeChat Pinterest Print Copy permalink