HONG KONG (WASHINGTON POST) - The protester stared at the thin ropes: Draped over a steel-and-glass bridge, they dropped more than 6m to a freeway littered with broken umbrellas and spent tear-gas canisters.

Yui, a 28-year-old graphic designer, assessed his options: Risk this precarious way out - the only viable route - or surrender and face prison.

Across the highway, riot police had spotted him and other protesters huddled on the bridge, and were firing tear gas at them and calling for backup. The window was narrowing.

"I had already been arrested once before, so I knew that if I was arrested again, that would be it," he said.

With his back towards the freeway, he began rappelling down as others waited their turn, according to Yui's account of his escape from Hong Kong's Polytechnic University.

The friction from the rope grazed his palms and wrists. With more tear gas drifting over, he jumped the rest of the way to the freeway, fracturing his left foot.

Yui, who would be identified by only his nickname for fear of arrest, is one of dozens who made daring getaways from the university this month.

Police had sealed off the campus after pro-democracy protesters barricaded themselves in, precipitating the most ferocious battle in six months of anti-government unrest.

The dramatic siege brought the movement for a more democratic Hong Kong close to the breaking point.

Trying to hold ground was a major shift from the protesters' "be water" tactics since summer: bubbling up in various locations and keeping the authorities guessing. This time, protesters were pinned down and surrounded.

Police had threatened to use live ammunition to stop the demonstrators, who had amassed an arsenal of petrol bombs, bows and arrows, and other projectiles. Many say they are fortunate to have escaped alive.

Some protesters fled through the cockroach-infested sewers. Some climbed over barbed wire and cut their way through fences.

Yet the experience has not deterred them.

Yui is already thinking about his next fight on the front lines, irritated that he must wait for his foot to heal.

Two other escaped protesters interviewed by The Washington Post echoed the sentiment, saying they were motivated by local elections on Sunday (Nov 24) in which voters resoundingly endorsed Hong Kong's pro-democracy camp and rejected pro-Beijing candidates.

Those who made it out of the university were lucky. More than 1,000 people were intercepted by police, and all of them - apart from minors - could face up to a 10-year prison sentence on charges of rioting.

On Wednesday, police said university staff members who scoured the premises earlier in the day found no one remaining, but later that night, a lone protester gave a news conference at the university saying a handful remained, hidden in the sprawling campus.

Police officers on Thursday morning entered the campus with a "safety team" to clear dangerous chemicals and debris - marking an end to the stand-off.

But not, it seems, the end of the conflict.

"We will come out to the streets as always, as long as there is injustice in society. It has not changed," said Angus, 33, who escaped the university on his third attempt.

The siege underlines the radicalisation that has taken hold among young protesters, who say they are determined to fight to the end - whatever and whenever that may be.

Without any concessions from the Hong Kong or Chinese governments, protests look set to continue.

"This will not be our last battle," said Lucy, 32, another protester. "No matter how many people they arrest, there will always be more and more of us."

In June, Yui started attending street protests over a now-scrapped extradition Bill that would have allowed criminal suspects to be sent to mainland China.

The proposals set off a firestorm in Hong Kong, reawakening residents' fears that their semi-autonomous territory's cherished legal system, cultural identity and freedoms were being chipped away by an increasingly aggressive Beijing.

These freedoms were meant to be guaranteed until 2047, half a century after Britain handed Hong Kong back to China.

"I am fighting for my future, because it is hard for me to see my future in Hong Kong," said Yui, sitting on a couch in a 400 sq ft apartment he shares with his mother and sister.

As protests grew more intense over recent months and police cracked down harder, Yui increasingly took to the front lines, forming part of a squad that smothers tear-gas canisters fired by police.

On Nov 11, Yui watched message groups light up with calls for front-line protesters to head to the Chinese University of Hong Kong, one of the city's most prestigious colleges.

The death of a young demonstrator had sparked new clashes, and now riot officers were trying to storm the campus to make arrests.

Eventually, the police retreated. The protesters' weapons were too powerful and the geography of the campus - set atop a hill - was unfavourable for a full-scale assault.

In the following days, protesters fearful of a similar showdown with police began barricading other universities. 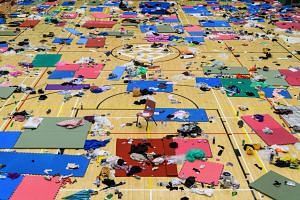 The authorities, they speculated, were hoping to neutralise the movement's most radical core members, thought to be scattered across Hong Kong college campuses.

Yui hopped between campuses looking to see where he was needed, before receiving messages calling for backup at Polytechnic University.

When he arrived on Sunday morning, the mood was already tense as police numbers swelled outside.

Yui recognised some of the front-line protesters from Chinese University the previous week, the ones who were most aggressively girding for a battle.

"The moment when I saw them, I thought surely there will be a fight happening that night," he said.

Angus arrived at Polytechnic University the same morning on Nov 17.

Identifying himself as a front-liner, he was ushered into a room stockpiled with bows and arrows, knee pads, body armour and chemicals for Molotov cocktails.

By the afternoon, police were firing tear gas onto the campus as protesters fought back with petrol bombs and other weapons. One shot an arrow into a police officer's shin.

Eventually, the authorities issued an ultimatum: Everyone inside must leave by 10pm or face arrest on rioting charges.

Yui moved to the front line. But the tear gas was more than he could withstand, and several times he felt like he was choking. He messaged his parents, telling them that he feared for his life and that he loved them.

He added: "I will say that I finished my duty."

At 3am on Monday, he retreated to a futuristic glass building that contrasts with the red-and-brown brick of much of the campus.

Exhausted, he managed only a brief sleep before an elite police squad known as "raptors" tried to storm the entrance to the campus before dawn, arresting dozens as they went.

He set off in search of his friends - a crew of about eight others - and began plotting their escape.

"We knew we had to leave, and leave together as a team."

Yui's teammates escaped uninjured in their eventual breakout 12 hours later. But dozens of others weren't so lucky.

Lucy, who similarly escaped by rappelling down the ropes, hurt her leg during her jump and scrambled into a moving car with four other protesters stuffed into the back seat. It sped away before the door could close.

As the car headed down the freeway into the heart of Kowloon, one of the passengers - a protester who had rappelled down before Lucy - appeared to have suffered a head injury.

He kept asking why he was in the car, what he was doing at Polytechnic University and where he was going, appearing afraid and discombobulated, Lucy said.

The next day, hospital officials said they were handling a large number of people injured at Polytechnic University and advised Hong Kong residents to postpone non-urgent treatment.

Yui, sitting in an apartment filled with evidence of his present life (goggles, helmets, crutches, gas-mask filters) and that of his recent past (SpongeBob SquarePants stuffed toys, figurines from the movie Minions) appears relaxed.

There is no point feeling scared anymore, he says, because it is over.

Yui has dyed his hair a different colour to avoid detection, and he says he will replace his phone after he accidentally connected to the university's Wi-Fi.

"I've 'levelled up' again," he says proudly, likening the movement to a video game.

But when he sleeps, it catches up with him.

"My mother says she can hear me scream in my sleep, she hears me, I'm shouting things like, 'Let's go! We need to go!'" he said.

"She said it scares her."