Prime Minister Lee Hsien Loong's visit to China this week served to stabilise and improve ties between Singapore and China after a blip last year, with both sides expressing keenness to take the relationship forward.

Chinese media have been mainly positive about Mr Lee's first official visit in four years to Beijing - his last being in August 2013 - although some, like the nationalistic Global Times, were more reserved.

Beijing certainly made Mr Lee feel welcome. Both Singapore and Chinese flags were flying from lamp posts in Chang'an Avenue, and his meeting with President Xi Jinping on the second day was the top item of the main news bulletin of state broadcaster CCTV. Along with clips of his meetings with two other top leaders that day, Mr Lee's visit took up a total of seven minutes of the 30-minute bulletin.

Mr Lee also got to meet four of the seven members of the apex Politburo Standing Committee, something that has not happened since his first official visit to China as Prime Minister in 2005.

This visit took place at a crucial and busy time for China, just short of a month before a five-yearly national congress of the Chinese Communist Party where a leadership transition will take place.

Such cordial treatment is in stark contrast to what has been widely seen as a cold shoulder last May, when Mr Lee was one of just three Asean leaders not invited to the inaugural Belt and Road Forum in Beijing, presided over by Mr Xi.

The treatment this time has led China Daily to opine in an editorial that "China-Singapore relations are resilient" and that Mr Lee's visit would help to revive "previously strong rapport" after months of unease in the two countries' relationship.

However, in a sign that things are not yet all hunky-dory, Mr Xi, at his meeting with Mr Lee, said the two sides needed to build mutual political trust and support each other on issues of core interests and major concerns.

"Beefing up mutual political trust and continuing to consolidate and develop bilateral ties are in line with the interests of both countries and their people, and will also benefit regional and global peace, stability and prosperity," he was quoted by China Daily as saying.

While Mr Xi did not spell out what he was referring to, Chinese media have pointed to Singapore's stand on the tribunal ruling in July last year in a case on the South China Sea dispute brought by the Philippines against China, as the start of the souring of bilateral ties.

Singapore had said then that it had taken note of the ruling and that it supported the peaceful resolution of disputes in accordance with the principles of international law.

However, to the Chinese, as China Daily put it, Singapore had urged China to accept the ruling, which Beijing had rejected as illegal and invalid.

The Global Times, in an editorial on Tuesday, said China needed to develop an inclusive and cooperative relationship with Singapore, provided that "Singapore doesn't stir up trouble against China among Asean countries".

However, an opinion piece under the pseudonym Xiakedao in the overseas edition of the party newspaper, People's Daily, was more conciliatory.

"Objectively, the China- Singapore relationship has never left the 'right track', and the main reason is that the two countries have wide-ranging common interests," it said.

It went on to say that next year, Singapore would be Asean chair and that managing China-Singapore relations well was important to not just the two countries, but also the entire 10-member Asean grouping. 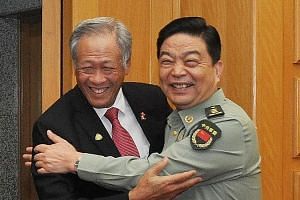 During his visit, Mr Lee made clear to the Chinese that Singapore would deepen cooperation between China and Asean.

Beyond the short term, however, Mr Lee admitted that the relationship was a changing one that Singapore needed to adjust to for it to stay meaningful.

While both sides have shown willingness to make efforts to move beyond the unhappy recent months, Singapore, as the smaller of the two countries, would likely have to be the more nimble in doing so.