HONG KONG (AFP) - As attendance at Hong Kong's traditional protest rallies wanes, one pro-democracy group is trying to win hearts and minds in a more pragmatic way - through plumbing, electrics and household repairs.

The novel approach comes as semi-autonomous Hong Kong's freedoms are under threat from an increasingly assertive Beijing and the city's splintered democracy movement struggles for momentum.

Volunteers visit homes in the To Kwa Wan neighbourhood each week, making appointments for DIY jobs and offering repair services for free, with residents usually paying for their own replacement materials.

They work in pairs, one fixing, the other chatting. Sometimes the conversation will turn to politics, other times not.

Resident Mr Wong said volunteers from the group had fixed his television. They also helped him and others write letters to officials over concerns local people were being rehoused in poor conditions to make way for new development projects.

"Just one person's power is not enough. We need neighbours joining forces for results," Wong said.

Another resident Mr Cheng, a wall painter originally from southern mainland China, said he had not discussed politics with the group, but appreciated their help.

A volunteer was fixing a broken strip light in his apartment when AFP visited.

Cheng's flat is housed in one of numerous rundown blocks in To Kwa Wan, home to low to middle income families and refugees.

He told AFP he was too preoccupied with daily struggles to join any of the group's activities, which range from barbecues to political campaigns, but did not mind the volunteers' pro-democracy ideas.

"As long as it doesn't hurt me, that's fine," Cheng said.

Fixing Hong Kong was formed by activists who ran a recycling operation at protest camps set up during the massive 2014 Umbrella Movement rallies, which called for free and fair leadership elections in Hong Kong.

The rallies failed to win reform and since then activists have been prosecuted on protest-related charges and disqualified from the legislature, denting the democracy campaign.

At the same time, pro-democracy politicians have been criticised for losing touch with the grassroots while some pro-Beijing candidates have become more strategically focused on working-class voters and livelihood issues. 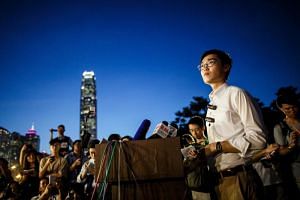 Small groups like Fixing Hong Kong believe going back to neighbourhood level is the best way to rebuild support.

The approach is a legacy of the rallies, says researcher Klavier Wong, who says the protests gave a rare opportunity for young Hong Kongers to "become aware of how to communicate and interact with strangers, and to do something together".

Although the protest camps that sprawled over junctions and roadways in major commercial areas angered some residents, others embraced the spontaneous tent communities which included homework areas for students and art installations.

Fixing Hong Kong is one of the best-known community groups to have grown out of the rallies. Other small-scale projects, from urban rooftop gardens to rural farms, have been set up by activists too.

The trend also taps into young people's desire to reconnect with their surroundings as private housing estates and shopping malls erode a sense of community living, adds Wong, who researches social movements and identity in Hong Kong.

Fixing Hong Kong member Leung says group activities such as reclaiming public spaces for community events may not be directly related to the wider political system, but are still "everyday politics".

And while volunteer fixer Leung Chan, an electrician, admits it can be hard to engage residents in politics when they have a host of daily struggles, he believes the group should persevere.

"If we don't make the first step, then nothing is possible," he told AFP.

"First there needs to be trust between people."