In their article, the writers call for greater public-private participation to tap the value of e-waste.

BEIJING (CHINA DAILY/ASIA NEWS NETWORK) - If China is to realise its ambition of being an ecological civilisation, while still modernising and upgrading its economy, the electronics industry provides one of the biggest opportunities.

China's economy has been driven by manufacturing across a number of sectors for decades.

In the Chinese manufacturing sector, there have been long-term efforts to move up the value chain from producing low value goods to developing value added products and globally recognised brands.

In 2015, the State Council, China's Cabinet, made this intention official with the Made in China 2025 plan.

Nowhere is this vision more relevant than in the electronics sector.

China is already a leader in the production of electronics. 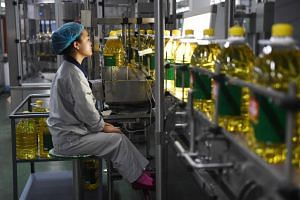 Roughly 70 per cent of the world's mobile phones are produced in China and many of the largest electronics companies manufacture their products in China.

Contract manufacturers like Pegatron and Foxconn have become huge companies and employers.

Chinese companies are also world leaders in the sector, Lenovo and Huawei, and newcomers such as Oppo and Xiaomi are recognised as some of the biggest brands in the PC and mobile markets.

Electronic components and devices are the enabling technology of modernising the manufacturing industry itself, serving as the backbone for the industrial internet of things and robotics, leading to greater automation and efficiency.

China is also the world's largest market for the consumption of electronics with 82 per cent of the Chinese population already mobile subscribers.

The industry has been an important pillar for improving livelihoods and driving GDP growth with domestic consumption.

But with more and more devices being produced and consumed, we are also seeing the rise of electronic and electrical waste (e-waste).

This electronic waste can contain substances that are hazardous to human health and the environment, particularly where there are no formal systems in place to recycle and dispose of old devices.

In some cases, our used electronics end up in landfills or "e-waste" dumps where informal workers dismantle devices to obtain the valuable raw materials inside them such as gold, cobalt and tin.

These informal processes can be dangerous, releasing hazardous materials that can poison workers and communities and be devastating for the surrounding environment.

As the electronics industry and broader advanced manufacturing industry continue to grow and evolve, electronic devices will become even more ubiquitous than they are today.

With a predicted 25-50 billion connected devices to come online by 2020, e-waste is the fastest growing waste stream in the world.

During the 18th National Congress of the Communist Party of China an ecological civilisation was listed along with economic, political, cultural and social progress as one of the five goals in the country's overall development plan, putting it at the top of the domestic agenda.

President Xi Jinping remarked that building an ecological civilisation is of "fundamental importance for the sustainable development of the Chinese nation", citing issues such as air pollution and waste management as key for the country.

There is a lot of economic value in electronic waste. For example, there is 70 times more gold in a tonne of smartphones than in a tonne of gold ore.

The United Nations calculates that e-waste is worth 55 billion euros (S$86.5 billion) annually, which is more than the GDP of most countries.

Currently, the recovery rate of key materials for electronic devices, both globally and in China, is quite low.

In a recent study on the topic undertaken by the World Economic Forum and Tsinghua University, the current recycling rates of four key metals and metal groups in China ranges from 10.7 per cent and 6.1 per cent for aluminum and tin to 0.6 per cent for cobalt and 0 per cent for rare earths.

Globally only around 13 per cent of e-waste is recycled.

Every year, according to the United Nations, an estimated six million tonnes of domestically consumed products are discarded in China.

This waste of valuable resources is not aligned with the long-term goals of increasing local procurement of materials and components.

While China has a lot of natural resources, they are being extracted at a high rate and some critical materials such as cobalt (a key material for batteries) are in short supply.

Just under half the cobalt used in the electronics industry is currently imported according to Tsinghua study.

Electronic waste could be a major source of the materials needed for Made in China 2025. Already e-waste recycler GEM China produces more cobalt than China mines in a year.

A circular economy for electronics would maximise the amount of valuable e-waste back into the production of new electronic products and components, allowing for greater productivity of our scarce natural resources.

This would be a benefit for realising an ecological civilisation while also modernising China's economy.

It would also enable more local procurement of materials and components, as recycling and recovery systems will be implemented in China.

Given the win-win nature of a such a circular economy, China has already set targets on this front.

The State Council has established the Producer Responsibility Extension System Implementation Program ("PRE Program") which sets ambitious targets including sourcing 20 per cent of materials for new electronic products from recycled content and recycling 50 per cent of all e-waste by 2025, moving toward a circular economy in the electronics industry.

China's leading research and academic institutions such as Tsinghua University, have been studying this issue for some time and have partnered with the World Economic Forum to identify solutions and opportunities for rethinking the entire electronic device life cycle; from the collection and recycling of used devices to the incorporation of industrial scrap and post-use materials into new devices, to remanufacturing and refurbishment of older devices.

Companies such as Huawei, Lenovo, Apple, Dell and Phillips have made global commitments to designing e-waste out of the electronics value chain and have openly committed to supporting China's e-waste goals.

What's needed now to achieve these ambitious targets, is greater public-private cooperation and innovation on the shift toward a circular economy for electronic devices.