BEIJING (REUTERS) - It is in the best interests of Taiwan's remaining diplomatic allies to recognise an"irresistible trend" and ditch Taipei in favour of ties with Beijing, Chinese Foreign Minister Wang Yi said on Thursday (March 8).

Self-ruled Taiwan, which China claims as its own, has formal relations with only 20 countries, many of them poor nations in Central America and the Pacific.

China says Taiwan is simply a wayward province with no right to state-to-state ties.

China and Taiwan have tried to poach each other's allies over the years, often dangling generous aid packages in front of developing nations, although Taipei struggles to compete with an increasingly powerful China.

Panama severed its long-standing relationship with Taiwan last year in a major diplomatic victory for China.

The Vatican is likely next on the list, as the Holy See and China edge closer to an accord on the appointment of bishops.

Wang said there was only one China and Taiwan was an inalienable part of it, something he said was already the long-standing consensus of the international community. 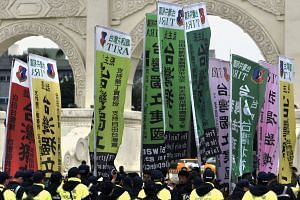 "Upholding the 'one China' principle and not having official contacts with Taiwan has already become one of the international norms for countries to follow," he said on the sidelines of the annual meeting of parliament in Beijing.

"Establishing diplomatic relations with the People's Republic of China, the only legal representative of the entire Chinese people, and having normal cooperation is obviously the correct choice that conforms to the times," Wang said.

He said it was "the general and irresistible trend" and was in the long-term interests of those countries.

Speaking in Taipei, Mr Chiu Chui-cheng, deputy minister of Taiwan’s China policy-making Mainland Affairs Council, said the Republic of China, Taiwan’s official name, was a sovereign country with the right to develop relations with other countries.

“Mainland China should fully respect our rights to maintain diplomatic ties with our allies,” he told reporters.

“During the past two years, mainland China has continued to maliciously manipulate its ‘one China’ policy in the international community and squeeze Taiwan’s international space with its zero-sum thinking. That has hurt the feelings of the Taiwanese people.”

China's hostility towards Taiwan has risen since the election of President Tsai Ing-wen from the pro-independence Democratic Progressive Party in 2016.

It suspects Tsai wants to push for formal independence, which would cross a red line for Communist Party leaders in Beijing, although Tsai has said she wants to maintain the status quo and is committed to ensuring peace.