TAIPEI (AFP) - Taiwan's vice-president will visit the Vatican to "deepen ties" after the island's only official ally in Europe made a historic deal with Beijing, the Foreign Ministry said on Tuesday (Oct 2).

The announcement comes less than two weeks after the landmark agreement between China and the Holy See on the appointment of bishops, which paved the way for a rapprochement between the Vatican and the communist country.

That raised questions over the future of official ties between Taiwan and the Vatican as China makes a concerted effort to poach the island's dwindling number of diplomatic allies.

China sees self-ruling democratic Taiwan as part of its territory to be reunified and demands its allies forfeit recognition of the island.

Vice-President Chen Chien-jen will visit the Vatican on Oct 14 to attend the canonisation of Pope John Paul VI, the Foreign Ministry said.

The visit will include a private audience with Pope Francis and Mr Chen will invite him to Taiwan, said Deputy Foreign Minister Kelly Hsieh. 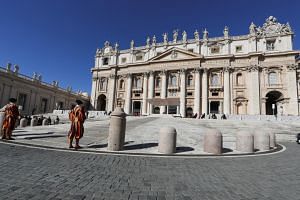 Pope confirms he will have last word on naming China bishops

"The Vice-President will express his hopes that the Vatican will continue to pay attention to Taiwan, and also to continue to care for Taiwanese Catholics," Mr Hsieh added.

He reiterated the government's belief the Vatican would not "abandon" Taiwan.

The last time a high-ranking Taiwanese official visited the Vatican was in 2016, when Mr Chen also led a delegation for the canonisation of Mother Teresa.

Taiwan, which has around 300,000 Catholics, has lost five allies to Beijing in the past two years.

Relations between Taiwan and China have deteriorated since President Tsai Ing-wen came to power in 2016, as she does not recognise the island is part of "one China".

The Vatican has not had diplomatic relations with Beijing since 1951.

Pope Francis has sought to improve relations since he took office in 2013, but previous attempts foundered over Beijing's insistence that the Vatican give up recognition of Taiwan and promise not to interfere in domestic religious issues.

There are an estimated 12 million Catholics in China, divided between a government-run association whose clergy are chosen by the Communist Party, and an unofficial church which swears allegiance to the Vatican.

Beijing has insisted that it had the right to ordain its own bishops, defying the Holy See, which says ordinations can only go ahead with the pope's blessing.