HONG KONG (NYTIMES) - For the last two years, tensions have been brewing in a sleepy Taiwan village after a contractor hired to expand the local Buddhist temple wound up taking over the site, evicting the nuns and converting it into a shrine to the Chinese Communist Party, the historic rivals of the Taiwanese government.

This week, those tensions came to a head after county officials moved ahead with plans to raze part of the historic temple.

The decision was made after The New York Times reported last week on the temple's fate, stirring outrage among Taiwanese who were upset that such a bold display of support for the mainland government could be allowed on the island.

Videos taken from Biyun Temple on Wednesday morning (Sept 26) showed three large bulldozers tearing down the exterior of the large temple addition where, for the last two years, the contractor, a man named Wei Ming-jen, had presided over a daily ceremony in which the flags of the People's Republic of China and the Chinese Communist Party were hoisted high above the Taiwanese countryside.

Previously, county officials had shrugged off the temple's existence, citing Taiwan's broad protections for freedom of speech. In an interview this summer, Mr Akira Chen, the director of the Changhua county cultural affairs bureau, said the huge temple addition had been slated for demolition because of concerns about its structural safety, but that the government did not have the funds at the time to take action.

But circumstances appear to have changed. Speaking on Wednesday by telephone from the demolition site, Mr Chen said it would take at least a week to tear down the entire temple addition, which will leave only the original, smaller temple structure on the property. According to Mr Chen, Mr Wei, the contractor, will be forced to pay the cost of demolition.

It remains unclear what will happen next. 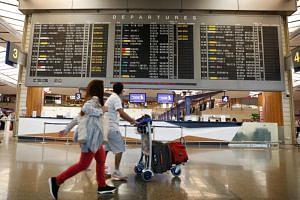 Taiwan braces for Chinese cyber attacks ahead of elections

In the decades since the Chinese Nationalists were defeated by the Chinese Communist Party and set up a government in exile in Taiwan, the island has evolved from a harsh, authoritarian system into a flourishing democracy with freedom of speech and expression.

Because of those protections, Mr Chen said, the government would not be able to stop Mr Wei from setting up a similar shrine to the Chinese Communist Party in the original, smaller part of Biyun Temple despite concerns about his stated goals in setting up what he called his "patriotic education base".

"I declare to the whole world and all of China that I am determined to lead the people of Taiwan province to reunify with our motherland," Mr Wei once said.

Though Mr Wei insists that creating the Communist Party shrine was his own idea, locals have expressed concerns - with no direct evidence - that Mr Wei is acting as a proxy for the Beijing government, a suspicion that has been amplified by recent revelations about China's efforts to influence the domestic affairs of countries such as Canada, Australia and New Zealand.

"While freedom of speech is important, this is also about the national security of Taiwan," he said. "The government and people in Taiwan should consider this more seriously."

The demolition comes as Beijing has been ramping up pressure on Taiwan, which China's communist government sees as part of its rightful territory but has never ruled.

Under President Tsai Ing-wen, whose Democratic Progressive Party is sceptical of closer relations with China, cross-strait relations have worsened. Earlier this month, Beijing and Taipei exchanged new accusations of espionage.

In a statement on Wednesday morning, Mr An Fengshan, spokesman for China's Taiwan Affairs Office, said the demolition of the temple addition showed that "some people in the Democratic Progressive Party not only tolerate and ignore separatist behaviour promoting 'Taiwan independence', they also attack and persecute Taiwanese who favour unification".

"Such an action must be subject to strong opposition and condemnation from people on both sides of the strait."

Reached by telephone on Wednesday morning, Ms Lee Pai-jan, Mr Wei's wife, said it was "not convenient" for her husband to talk.

For now, though, there is relief in the village. Since 2012, after Mr Wei took over the temple and evicted the nuns of Biyun Temple, the nuns have been living in a makeshift encampment adjacent to the temple property and making their case to move back to the temple, to no avail.

Shi Fa-ming, one of the nuns, said on Wednesday morning that in the light of the demolition, they could be a step closer to reclaiming the temple.