TAIPEI - Taiwan President Ma Ying-jeou will meet Chinese President Xi Jinping in Singapore on Saturday (Nov 7), the first meeting between the top leaders of the two sides since 1949.

Mr Ma's spokesman Charles Chen confirmed the meeting on Tuesday (Nov 3) night. He told Taiwanese media that the intention of the visit is to "secure cross-strait peace" but that no agreement would be signed and no joint statement would be made.

Mr Chen said President Ma will leave for Singapore on Saturday where he will meet President Xi.  “The purpose of President Ma’s visit is to secure cross-strait peace and maintain the status quo of the Taiwan Straits,” Mr Chen said in a statement.  “No agreement will be signed, nor any joint statement be released,” he added.

The meeting will coincide with President Xi's visit to Singapore on Nov 6-7.

It will be the first meeting between the top leaders of the two sides since the end of the Chinese civil war in 1949.

Mr Ma's Kuomintang fled to Taiwan in 1949 after losing the civil war to the Chinese Communist Party. Exchanges between the two sides began in the late 1980s.

According to the report, both sides have been in talks for quite sometime to arrange the historic meeting. 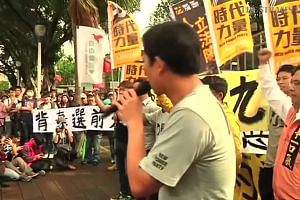 The upcoming meeting will be the second time Singapore is playing a part in a breakthrough event in ties between the two political rivals.

In 1993, the two sides held landmark public talks for the first time, in Singapore, at which four agreements were signed to promote trade and people-to-people exchanges.

When contacted, Mr Ma Xiaoguang, spokesman for China's Taiwan Affairs Office, would only say that China has always adopted an "open and positive" attitude when it comes to meetings between leaders of the two sides, reported Taiwan's Central News Agency.

Reacting to news of the impending meeting, Taiwan's opposition Democratic Progressive Party (DPP) was quick to slam it, saying that "the people of Taiwan will not accept such a meeting".

DPP legislative caucus whip Ker Chien-ming told Apple Daily that Mr Ma, who has just half a year of his term left, is a lame-duck president with no power to discuss any issue with Mr Xi.