"Military maneuvers by China's government constitute a serious provocation to Taiwan and a grave threat to regional peace and stability," the foreign ministry said in a statement.

"Today, the PLA has chosen to conduct exercises near Taiwan; tomorrow it may engage in similar threats near other countries."

The ADIZ stretches beyond Taiwan's airspace and is used to give an early warning of possible incursions.

The ministry accused Beijing of "introducing a factor of extreme instability" in the region and urged the international community to pay close attention to its "growing aggressiveness".

"Taiwan does not seek confrontation, but neither will it back down," the statement said.

Foreign minister Joseph Wu also tweeted condemnation of the incursion, calling it a "threat against the country & regional peace." 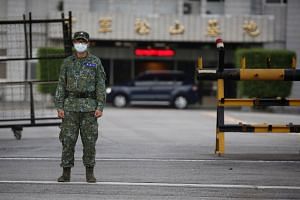 The Pentagon said it was closely monitoring the military exercise.

“The PLA activities in question are merely the latest in a string of destabilizing PLA actions aimed at both Taiwan and the broader region intended to intimidate and which increase the risk of miscalculation,” the Pentagon statement said, using an acronym for China’s People’s Liberation Army.

China’s Defence Ministry did not respond to a request for comment.

China views democratic and self-ruled Taiwan as its own territory and has vowed to one day seize it, by force if necessary.

Beijing has ramped up diplomatic, economic and military pressure on Taiwan since the 2016 election of President Tsai Ing-wen, who refuses to acknowledge that the island is part of "one China".