Taiwan was "on the front line defending democracies from being taken over by the communist China" and needed help from other countries, he told the France 24 TV station.

Wu said China "has been intensifying its military threat against Taiwan" in recent years and had stepped up military exercises in the region.

"We have been trying very hard in the last few years to beef up our own defence capabilities and at the same time we also want to let the international community understand that Taiwan as a democracy has been threatened by China, which is an authoritarian country which is trying to expand its influence," the minister said.

China views self-ruled Taiwan as its own territory and has vowed to one day seize it - by force if necessary.

Beijing has ramped up diplomatic, economic and military pressure on Taiwan since the 2016 election of President Tsai Ing-wen, who refuses to acknowledge the island is part of "one China".

Wu said a war with China "can be a real possibility if you look at the Chinese way of threatening Taiwan".

He also pointed to Chinese actions in the South China Sea, on the border with India, and in Hong Kong as examples of a threat to regional stability and the sovereignty of nations. 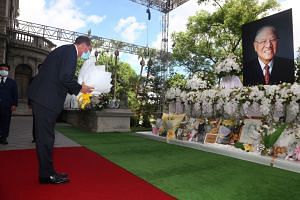 Senior US official to visit Taiwan this weekend amid China concerns

"We feel that like-minded countries or fellow democracies need to pay more attention to this area and come to each other's help so that China's expansionist motivation can be deterred."

The minister said Taiwan appreciated the United States "continuing to show its presence in this region, conducting freedom-of-navigation operations across the Taiwan strait or even the regions close to Taiwan.

"I think this is a show to the Chinese side that its military threat against other peace-loving countries wouldn't have been tolerated." Taiwan feared, Wu added, that China's national security law for Hong Kong, aimed at stamping out demonstrations, was but the "first step... in expanding its authoritarian order to the region.

"After Hong Kong we are very concerned that Taiwan might be the next and therefore we are working very hard to defend ourselves."